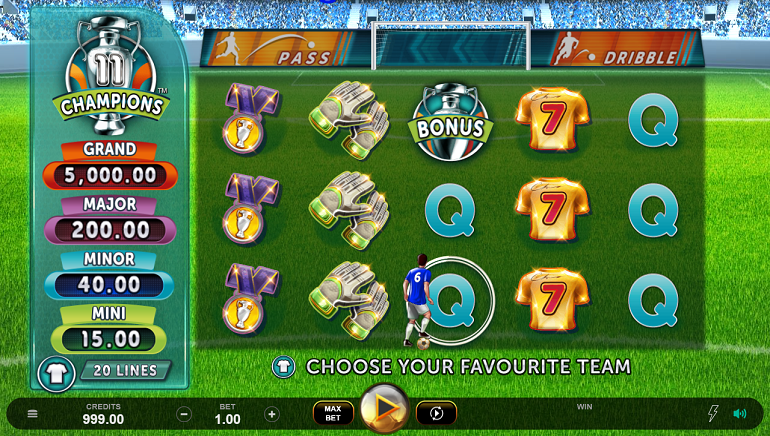 Football Star Deluxe, 11 Champions, and All Wins FC are three football slots that will be exclusively available from Microgaming during summer 2020.

Microgaming has a track-record of producing sports slots after previously exploring pursuits such as basketball, ice hockey, cricket, rugby, and horse racing. One of the best-known of the sports-themed Microgaming releases has been the provider’s Football Star slot, which has now received a sequel next to two other soccer slots scheduled for release from May 2020.

Comparatively, the brand-new Football Star Deluxe slot from Stormcraft Studios is more advanced than the predecessor. This time around, users get to play on a five-reel slot that has four options for paylines, including 18, 38, 68, or 88 paylines.

Football Star Deluxe lines up with an eye-catching five special features. Rolling Reels can remove winning symbols and replace them with new ones for free, whereas Striking Wilds™ can appear randomly and transform the second, third, or fourth reel wild. Other features include Growing Wilds™, a multiplier trail, and free spins.

All41 is the next Microgaming studio to contribute, having created the All Win FC slot. A slot interface of three rows and five reels has been assembled. On top of those symbol positions are 10 paylines and the potential for a jackpot of up to €500.

In the middle three reels, players can attempt to land golden trophies that morph into expanding wilds. In All Win FC, wilds can also upgrade symbols to higher-value ones, while three or more scatters trigger free spins.

Completing the hat-trick is the 11 Champions slot from Gameburger Studios. Microgaming describes 11 Champions as being highly volatile and with the potential for ample winnings from 20 paylines that appear over five reels.

Gameburger has made similar creative decisions and opted to integrate wild symbols, albeit with the enhanced Wild Streak™ Respin feature included. There are also scatter symbols and the potential to initiate free spins on the way to targeting the jackpot.