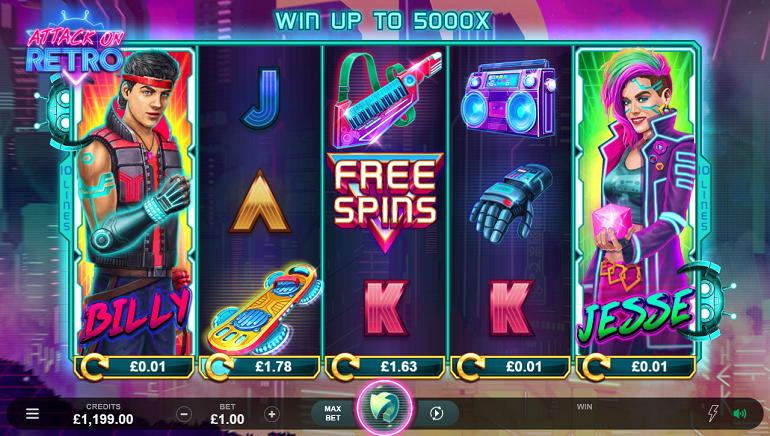 A host of new games are set to be added to the Microgaming online and mobile casino platform this month, with new titles from several sources.

The Microgaming casino platform is set for expansion this March, with new slots and Blackjack games coming from several different developers. The games will see leprechauns, dwarf miners and pirate monkeys starring in new feature-rich slots.

Independent developers and partner studios will see their games available across the online and mobile casinos that use the Microgaming content platform.

Triple Edge Studios are launching Attack on Retro, a cyberpunk-style slot where two heroic characters fight invading robots. It's a 5-reel, 10-line game with a 1980's vibe, and comes with features such as stacked wilds and random wild symbols.

9 Pots of Gold is an Irish-themed slot from Gameburger Studios. Launched in time for St Patricks Day, it features free games, a Pot Pays round, and wheel of fortune. Players can enjoy this 5-reel, 20-line game from 10th March.

Developed by Just For The Win, Treasure Skyland is set to sail on 24th March. It stars pirate monkeys searching for golden bananas across the reels. Treasure Skyland has features such as win multipliers, symbol upgrades, and a prize-picking side game.

Treasure Heroes comes from Rabcat and was released on 5th March. It has a 5x5 grid of symbols and cluster pays mechanism, plus special features such as the Moving Wall, and Treasure Chamber free spins. Mining Fever is also from Rabcat and launches on 31st March. Dwarf miners trigger their own features, such as Thundar's Dwarven Hammer and Bombur's Dwarven Bomb. It's a 5-reel game with a 243 ways to win system.

Partners of the Microgaming platform also have a host of games launching in March. Amazon Gold and Kanga Cash both come from Ainsworth and will be launched on the 12th, while their Twice the Diamonds game comes out on the 19th.

Wild Krakatoa, from 2x2 Gaming, White Rabbit, from Big Time Gaming, and Jessica Weaver, Queen of the Seas, from MGA are among the new games that will be added to the Microgaming casino platform before the end of the month.