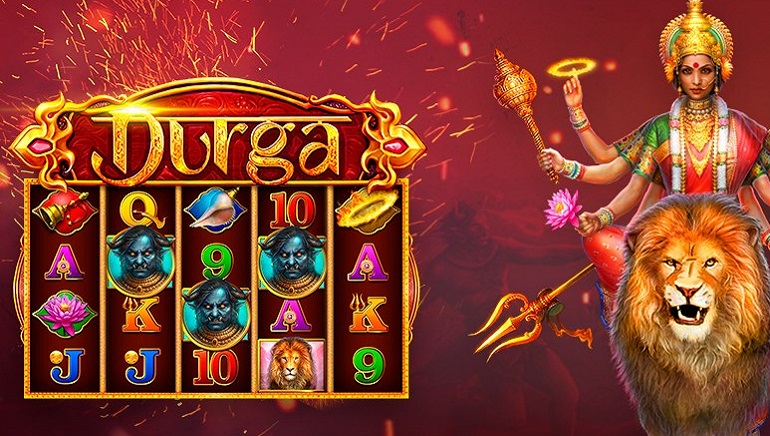 Games developer Endorphina has just released Durga, a slot machine based on Hindu Gods and their battle for darkness and light.

Czech-based software developer Endorphina is well known to deliver high quality slots with original themes, and their latest intriguing release Durga is no exception in that regard. Durga is based on a Hindu goddess and this multi-armed character takes centre stage in the game, which has 5 reels and 40 fixed paylines.

A Hindu Game In Time For Christmas

Durga is the goddess responsible for warding off evil forces and hopefully she will look after players as they spin up a few rewarding bonus features. The horned devil creature Mahisha is an important character here, bringing good fortune or bad luck when he appears, but Durga herself is sure to help reward spinners when she lands across any of the middle 3 reels and becomes an expanding wild symbol.

An interesting free spins feature gives players the option of 28 games with no win multipliers, 16 bonus spins where wins are doubled in value, 11 extra games with a 3x multiplier in effect throughout, or just 7 spins, but all wins multiplied by 5x. Mahisha awards these when he lands in any 3 or more places at once, so players will need to decide for themselves if they want lots of spins or some potentially high multiplier wins.

This bright and colourful slot has detailed symbols and takes players on an exciting journey to India, where they can experience the eternal battle being darkness and light for themselves.

What Does Endorphina Have To Say About Durga?

The Marketing Manager at Endorphina, Lucie Kadlecova has said about this new slot, "We are very excited about this new game because there is a very beautiful legend that this theme is based on. The main character in the slot, the Durga Goddess, is fierce and gifted with mighty powers to support the good in the world and to defeat the evil forces. The whole story will be disclosed on our social media and our website so make sure to stay tuned."

You can find Durga now at Endorphina-powered online casinos.