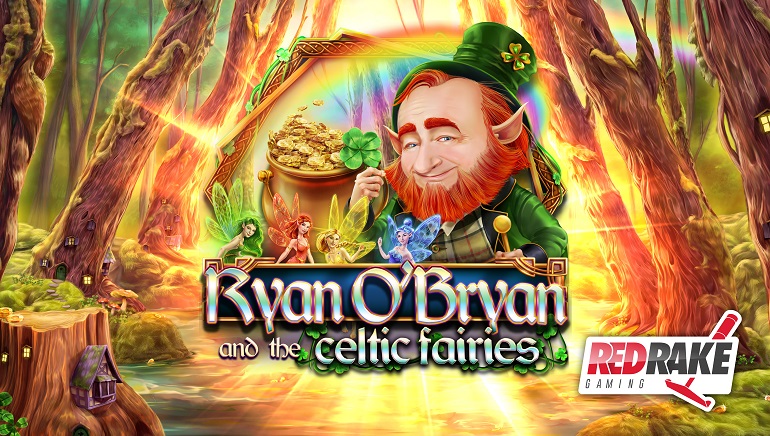 Ryan O'Bryan and the Celtic Fairies is a brand new slot from Red Rake Gaming that's packed with bonus rounds like free spins, pick-a-prize features, extra wilds and a dancing leprechaun who can multiply wins several times over.

Slots with an Irish theme are always a big success and Red Rake Gaming have joined in the Craic by releasing Ryan O'Bryan And The Celtic Fairies, a brand new game that takes players on a journey to the Emerald Isle where they will meet an assortment of characters such as fairies and leprechauns. With a huge number of bonus features, this game will surely give players the luck of the Irish.

About Ryan O'Bryan And The Celtic Fairies

Trees and a rainbow make up a pleasing background image, and the happy leprechaun Ryan is standing to one side watching players spin the reels, doing a little jig as they win prizes.

No Irish based game would be complete without some beer, four-leaf clover or the occasional pot of gold, and this one has them landing across 5 reels and 30 paylines, creating winning combinations or triggering bonuses such as a wheel of fortune, extra wilds and a mini game where the piles of gold can stack up.

All symbols are related to the theme, but it's the four fairies that take players to a special roulette wheel which spins to reveal a number of bonus games and multipliers that will be applied to any wins throughout them. Another in-game bonus sees the fairies taking extra wild symbols from the middle reel as it spins, adding them to the mix for the potential of some great payouts, while Ryan jumping around a bit will randomly multiply wins by up to 4x.

Those fairies are at it again, sprinkling magical dust across the reels at any time to turn regular symbols into extra wilds, and there's even a quick feature where reel 4 keeps spinning until Ryan stops it to reveal a prize. If that's not enough, then there's a gold pot mini game, where players just pick 3 of the 8 pots on show to collect some great prizes.

Ryan and his friends will be available to play at online casinos that carry software from Red Rake Gaming from 17th August, across mobile and desktop platforms.