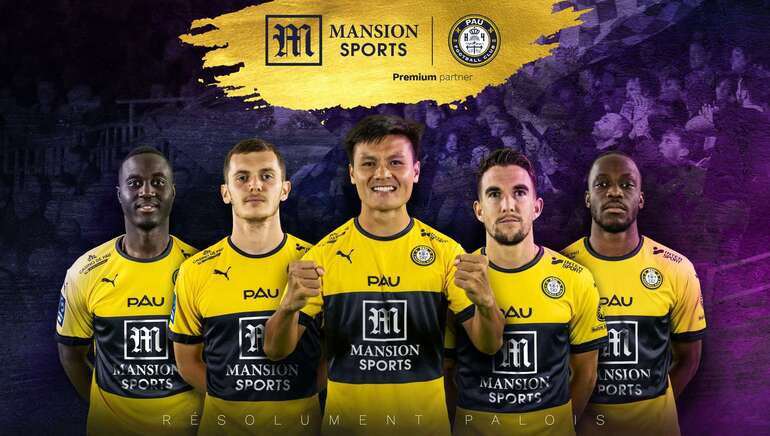 It's official: Mansion Sports and PAU FC have agreed to team up for a premium partnership in September 2022.

According to the terms of the partnership, PAU FC players will showcase the Mansion Sports official logo on their training kits and jerseys. Mansion Sports brand information will also be prominently displayed on the stadium grandstand. For the French football team, various benefits will accrue. For starters, PAU FC will enjoy significant marketing promotion across Asian markets, notably where Mansion FC enjoys a strong presence. PAU FC will tour Vietnam in 2023.

We are happy to have a football club rich in history, such as Pau FC, become part of the Mansion Sports family. We promise to deliver only the best to our esteemed partners.

Bernard Laporte-Fray, the owner of PAU FC, was equally upbeat about this brand-new partnership with Mansion Sports,

We are delighted to realize today a new step in our international development through the partnership with Mansion Sports. This new cooperation opens the club's doors to a new territory with great potential, which augurs rich exchanges both in human and structural terms.

A professional Vietnamese player, Nguyen Quang Hai, became the first-ever player from his country to be signed to this top-tier French football club. He is officially signed for the 2022/2023 season. Hai debuted on 31 July 2022 when he played against En Avant Guingamp. As a Ligue 2 team, PAU FC has an illustrious history.

PAU FC began in 1920 as Bleuets de Notre-Dame de Pau. After that, the team got divided, and Football Club de Pau was established in 1959. However, by 1995, PAU FC was under administration. The club then got relegated to France's fourth tier of the professional league. Then, under the ownership of Bernard Laporte-Fray, the club was transformed into PAU Football Club.

In the years since, the club has ascended the rungs of the French Football hierarchy, ultimately being promoted to Ligue 2 in 2020.

Mansion Sports & Entertainment Group is a prominent lifestyle and sports advocacy group that actively invests in and promotes sports centres and clubs around Asia. This group is a fresh entrant in the entertainment and sports betting industry. It has established its presence through soccer, badminton and basketball clubs. MSEG aims to become Asia's leading entertainment hub by partnering with several sports centres in Indonesia, Vietnam and Thailand and making multiple investments in F&B across Asia.

Pau FC was founded in 1995 by the previous Football Club de Pau. This club was created in 1959 to distance itself from Bleuets de Saint-Dame de Pau. Pau FC is managed by Didier Tholot. It plays its home matches at the Nouste Camp. With a capacity of just over 4,000, it was the smallest ground within the French second division. They have enjoyed a home base at Stade du Hameau for nearly three decades besides for Nouste Camp. This ground was shared with Section Paloise, a Rugby Union club.