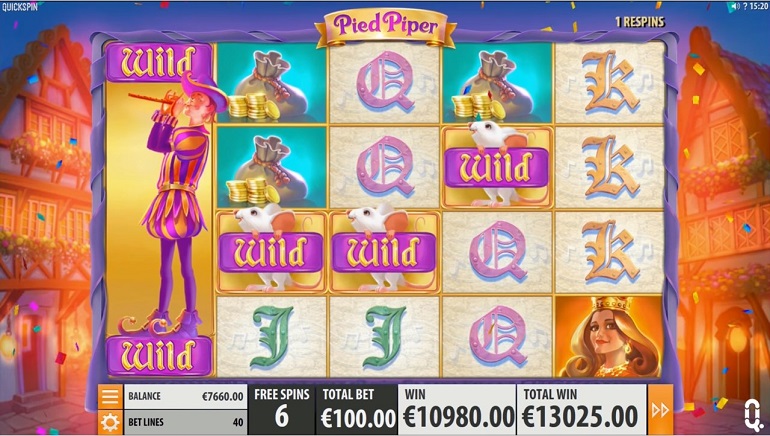 The new Pied Piper slot features 40 paylines and several interesting in-game features designed to keep players on their toes for every spin.

The New Year usually brings about a lot of changes and novelties, and the world of online casino is no exception to this rule. Quite a few game developers have been competing to put out brand new releases to give players something to be excited about during the first month of 2018.

Among them is Quickspin, a popular and innovative creator of casino slots that has recently revealed its latest game called Pied Piper, which is releasing to online casinos powered by the software today.

Pied Piper is based on the well known story about a piper with an extraordinary talent who helps the city of Hamlin in its time of need, getting it rid of a mice infestation. The story, as we all know, takes an interesting and rather unexpected turn, which helped it stay popular to this very day.

Quickspin's new slot will feature 40 paylines and a fairly decent RTP of 96.32%, combined with gameplay mechanics and the game outlay we're already used to from this company. Quickspin games are easy to recognize in the crowd, but that doesn't make them any less entertaining.

Plenty of Action on the Reels

The Pied Piper slot promises a lot of excitement and some good winning opportunities, especially for a Quickspin game. Piper Respins are the slot's main feature, triggered by the full Pied Piper wild symbol landing on a reel. This will trigger re-spins, with the main wild as well as any mice wild on the reels moving one place to the left on each spin.

Every now and then, at the end of the Piper Respins, the Mystery Re-trigger occurs, with the Pied Piper symbol reappearing on the rightmost reel, awarding additional five re-spins.

The mandatory free spins feature is triggered by landing three scatter symbols anywhere on the reels. The player is awarded ten free spins with up to six mice wild symbols added to the reels on each spin.