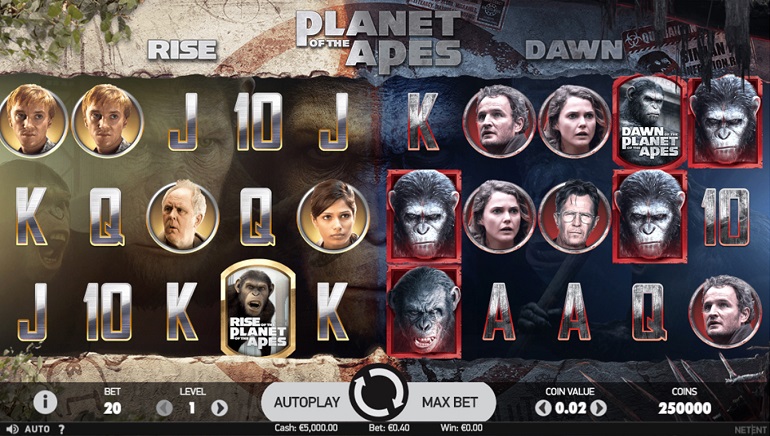 The first thing that catches one's eye with the new Planet of the Apes slot are two full sets of reels. We aren't talking about colossal reels found in some other slots, but two completely separate sets, basically giving players a chance to play two games at the same time.

The left side of the screen is reserved for the gameplay based on the Rise of the Planet of the Apes movie, while the right side features characters and cut-scenes from Dawn. Both sets feature five reels, three rows, and 20 different paylines.

As one would expect from NetEnt, the slot features many elements from the original movies, from symbols on the reels to the soundtrack, voices, and memorable scenes. On top of great visuals, however, Planet of the Apes also brings plenty of intricate features to keep players' attention.

First and foremost, both slots have their own features triggered by three or more scatters landing in their respective areas. These trigger Rise and Dawn free spins features, with each of these two rounds having its own special perks. During Rise free spins, players will collect wild symbols to use on the last spin, while the Dawn feature comes with several meters triggering various extras.

Both sets of reels also have an additional bonus feature triggered by the bonus symbol landing on the first (Rise) or the fifth (Dawn) reel.

Additionally, the Dual Symbol feature is where two sets of reels meet. This feature triggers randomly and selects two symbols, one for each area. These two become only symbols landing on the reels and the round continues for as long as at least one of them lands on the reels, awarding an extra spin. If the Rise symbol lands in the Dawn area, it is transferred to the corresponding position, and vice-versa.

Plenty to Be Excited About

Planet of the Apes brings a kind of gameplay we've never seen before, bringing a lot of excitement and potentially marking a new direction for the future NetEnt games. The classic theme, heaps of features, and astounding graphics should make the game quite popular with the players.