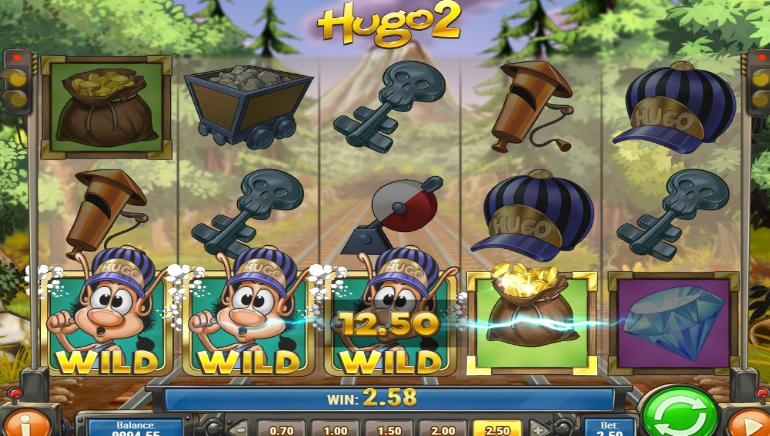 Play'n GO's Hugo 2 is a 5-reel, 10-payline video slot that invites players to hop on a mine trolley and follow the toothy little troll, Hugo, in his quest for treasure.

Play’n GO’s original Hugo slot was so beloved by players that the company decided to bring back the loveable troll for another escapade! Hugo 2, Play’n GO’s newest slot game, is releasing today, and it brings all the charm of the previous slot, along with some new surprises and adventures.

Hugo 2 is a 5-reel, 10-payline video slot that invites players to hop on a mine trolley and follow the toothy little troll, Hugo, in his quest for treasure. Contrary to what you might have thought, the game is brighter than you would expect of a coal mine, the graphics are cartoon-like, and the music has an upbeat tune.

Hugo himself acts as the wild symbol, the log-wielding Beaver is the freespin scatter symbol, and the Evil Witch Afskylia is the bonus scatter symbol.

Other symbols include a cart of coal, a whistle, a skull key, a diamond, a train lever, a bag of gold, blocks of gold, and a conductor’s hat.

When 3 beaver scatter symbols appear on reels 1, 3, and 5, the Troll Race Free Spin feature will be triggered, which awards players an initial 10 free spins. An additional 5 or 10 can be won during the feature itself. If players hit 20 free spins, they have the chance to enter the Skull Cavern bonus game with 3 lives.

Players can also enter the Skull Cavern Bonus game when 3 or more Evil Witch Afskylia scatter symbols land on the reels. This is easier said than done, however, and doesn’t happen too often during gameplay. However, if the bonus game is triggered, players can choose their paths inside the cave and try to find the treasure chamber to unlock the Evil Witch’s treasure. To do this, players need to pick the correct treasure key; finding the treasure at the end will award a total win multiplier of 2, 3, 4, or 5 times (the total depends on how many lives are left).