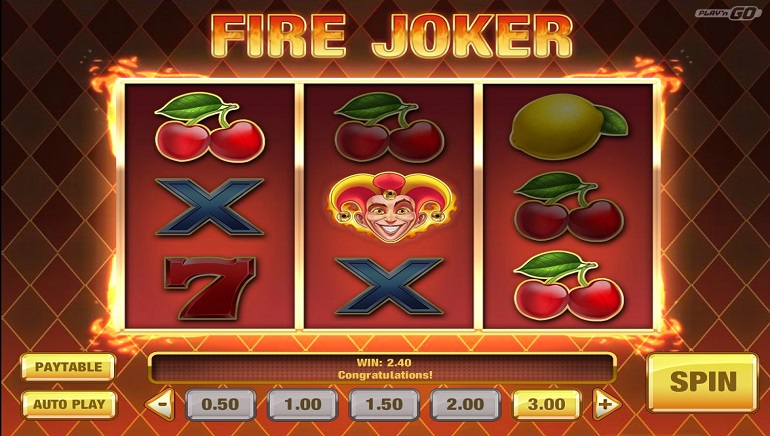 Play’n GO is has released their latest slot Fire Joker, a 3x3 game taking on the extremely popular retro theme.

Play’n GO’s latest slot game, Fire Joker, has gone live this week at Play'n GO powered casinos such as Video Slots Casino, Betvictor Casino and Casino Cruise. Play’n GO recently celebrated the mobile release of Sails and Gold and Golden Caravan, and Fire Joker also promises to be received warmly (no pun intended). The game is a fiery twist on a classic slot, with fruit symbols, lucky 7s, and a few hot features in the works.

Fire Joker is a great slot game for newbies who are just venturing into the world of online slots, and veteran players who appreciate simple, straightforward (yet lucrative) slot games. The background of the game is orange and there is a raging fire beneath the reels, and players can enjoy the game’s fun, upbeat soundtrack and crisp graphics.

The slot game itself is a simple 3x3 grid with five paylines, but don’t confuse simple with boring - the Fire Joker who serves as the game’s fixed wild can allow players to aim for a full house, which is when all nine symbols match. When that happens, a special multiplier wheel will appear, and players can try their hands at winning up to ten times their total pot.

Players can also win one free re-spin when stacked symbols show on any two reels and no winning paylines appear. In all, players can win up to 800x their original bet in this blazing game.

Play’n GO is one of the leading online gaming software developers in the world, and has been in the online gaming industry since the very beginning. To date, Play’n GO has released over 85 unique online casino games for both PC and mobile, including the recent releases of Sails of Gold and Golden Caravan.