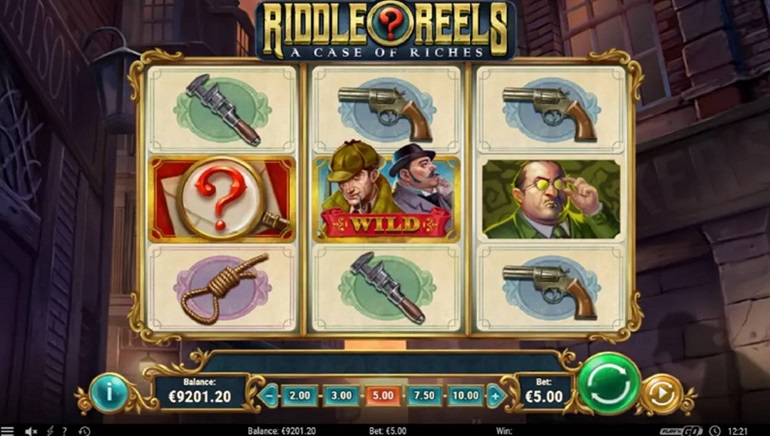 Play’n GO’s new slot, Riddle Reels: A Case of Riches, looks like a classic fruit machine but is much more intriguing. Players can follow Sherlock Holmes as he tries to crack the case, and encounter a Mystery feature, respins, free spins, and a lot more.

Play’n GO’s new slot, Riddle Reels: A Case of Riches, has the setup of a classic fruit machine but the theme is much more intriguing. Players can join the famous Sherlock Holmes as he tries to crack the case (what the case is, we’re not sure), and along the way encounter a Mystery feature, respins, and a Bonus round that includes a board of 14 clues. With a maximum potential win of 5000x the stake, there’s a lot more at stake here than the typical whodunnit.

Symbols including 4 suspects, 4 weapons, a scatter, and a wild, the latter of which can come with multipliers of 2x or 3x. Multipliers can combine all the way to 27x.

If 2 scatters lands on any 2 reels, the Respins feature is triggered. The 2 reels get held in place while the other reel spins. If a scatter does not land on that spin, the Mystery feature is triggered. During this feature, the scatters duplicate to cover their reels and reveal either a suspect or weapon symbol.

When 3 scatters land in the base game or as a result of 1 of the respins, the Bonus feature is triggered. In this round, a game board with 14 spaces appears, and in each space there is a clue. In all, players get 5 clues throughout the feature, 1 at the beginning and 4 with the roll of dice. Each clue awards players between 1-3 free spins. Additionally, each clue contains 1 of 4 variations:

To get the clue and earn clue points, players must get at least 1 winning spin during the free spins. Clue points are collected into a meter. If it gets fully charged during the Bonus feature, players are rewarded with a Mega Spin. If the meter doesn’t get fully charged, the Clue Point Wheel feature is triggered. This feature expands the meter and spins an arrow. If the arrow lands within the charged area, a Mega Spin will be triggered.

The Mega Spin is 1 free spin that has 1 entirely wild reel and 2 reels featuring only a suspect or weapon. Once the Mega Spin is finished, the Bonus feature is retriggered.

Riddle Reels: A Case of Riches may have a simple reel setup but the gameplay is anything but simple. With a Mystery feature, respins, free spins, and clues to collect, players will be entertained from start to finish. Riddle Reels is available at Play'n GO casinos, online and on mobile.