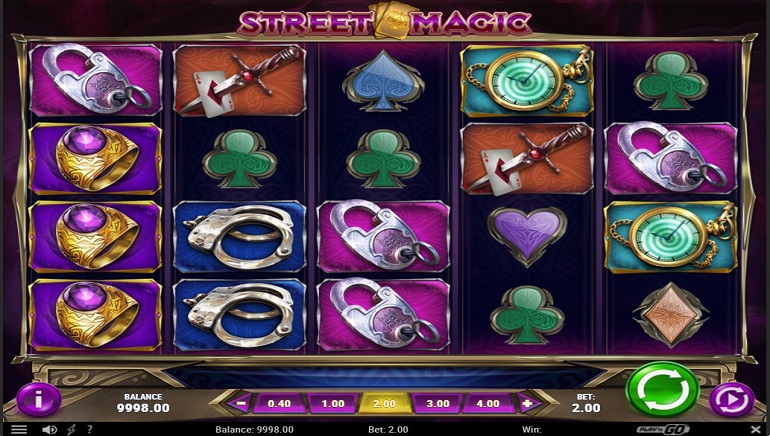 Play’n GO’s newest slot, Street Magic, features a magician as the star of the show, and he helps players conjure up wins by adding extra wilds, creating wild reels, and triggering free spins.

Play’n GO’s newest slot, Street Magic, features a magician as the star of the show, and he helps players conjure up wins by adding extra wilds, creating wild reels, and triggering free spins. Street Magic will be released on September 13 and available at Play'n GO online casinos.

Street Magic is a 5x4 slot that has 20 fixed paylines. Bets range from $.20 to $100, but the game is not for the faint of heart. While it’s RTP is fairly standard at 96.48%, it’s a highly volatile slot, which means striking big wins won’t come easy.

Symbols include a stopwatch, a dagger through a card, handcuffs, a lock and key, a magician’s hat, and card suits. There is also the magician symbol, which acts as both the wild and the scatter and appears only on reels 1, 3, and 5. As the wild, it replaces standard symbols to help create more winning combinations; as the scatter, the magician can trigger the Magician Performances feature when 2 or more land on the reels.

This special feature is really 3 features rolled into 1, though only 1 can be enacted each time it’s triggered. The 3 features of Magician Performances include:

The Free Spins feature can be triggered anytime 3 scatters land on the reels, whether it’s during standard gameplay or during the Magician Performances feature. To determine how many free spins you get, you’ll have to choose 1 of 3 cards, which will reveal 8, 10, or 12 free spins. When a wild lands on the reels during any of the free spins, it will become sticky and remain in place until the feature ends. During this feature, wilds can land on all reels, but there is no scatter. If there is at least 1 wild on each of the 5 reels, you’ll win more free spins.

Play’n GO’s Street Magic features incredible graphics and spectacular special features that have the potential for big payouts - when you hit them. All in all, it’s a fun, edgy slot, but because it’s highly volatile, will probably appeal most to the biggest risk-takers.