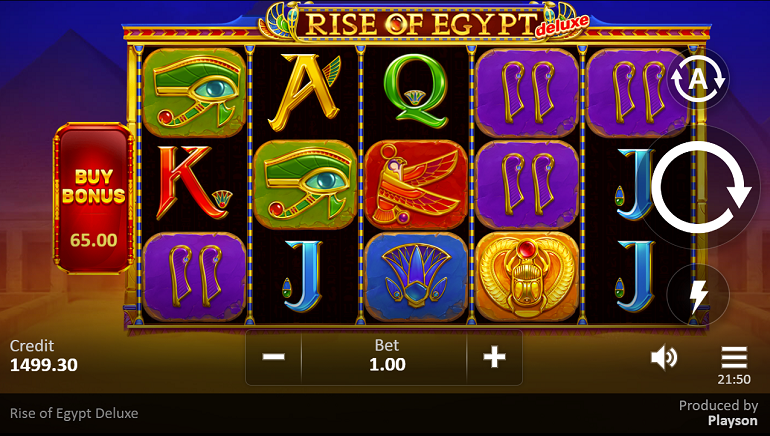 Rise of Egypt Deluxe is the first slot from Playson to offer a buy-in feature. Customers can immediately access a free spins bonus round with an extra bet.

Rise of Egypt Deluxe is a high volatility slot game from Playson that follows one of the most popular topics of all. It's the first slot in their range of offer the option to purchase an in-game feature, with players able to instantly launch a free spins round.

The Rise of Egypt Deluxe is a 5-reel game with 20 paylines. Alongside Egyptian-themed card symbols, players will see classic images such as the Ankh and Scarab Beetle. Scarabs are worth 20x the stake when landing right across a line.

The cat-god Bastet is a golden wild symbol, able to act as others if needed, and expands across reels if it's then able to make a winning combination. A gleaming pyramid scatter symbol in 3 or more places launches a free spins bonus round. Pyramids pay 2x, 15x, and 50x the stake for 3, 4, or 5 in view at once.

During the free spins, any time the wild symbol appears, symbols with smaller payouts get upgraded to the next most valuable, awarding players with higher prizes. Wins are paid out once the upgrades have completed. The wild symbol also adds 1 extra spin to the total on each appearance.

For the first time in a Playson slot, there's the option to purchase the bonus feature without waiting for the triggering symbols to appear.. For a wager equal to 65x the stake, players can gain instant entry to the free spins round, with an initial 12 bonus games playing out. The wild can still add extra spins, and upgrades symbols.

The ancient treasures of Rise of Egypt Deluxe can be found in desktop and mobile formats. It comes with average payouts of 95.56%. Players can stake between 0.20 and 100.00 on each spin of the reels and start their Egyptian adventure at sites featuring the Playson range.