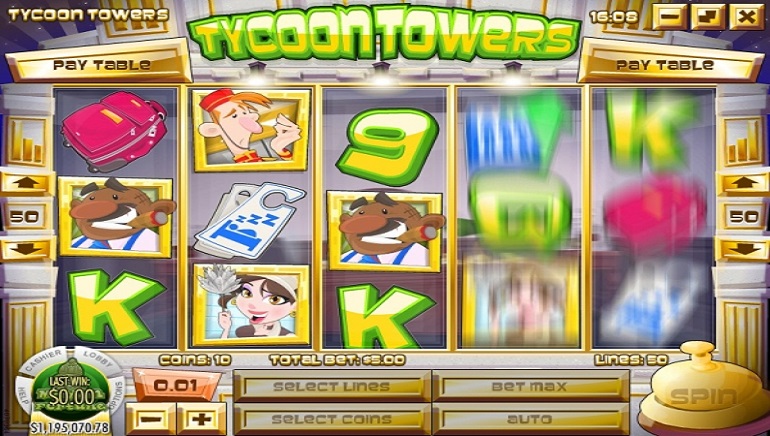 Monday 27 July marks the release of yet another new slot from Rival Gaming, adding to the 160+ games already conceived by the igaming software developer. Tycoon Towers is a charming business-themed slot designed with playful cartoon graphics. Bell boys, maids, managers, and tycoons all make an appearance to flesh out the cast of Rival’s Tycoon Towers slot.

Breaking Down the Specs

Tycoon Towers will load to play an intro cartoon that shows each of the characters as they go about their duties. After enjoying the video, a five-reel slot interface will appear to fill the screen. The cartoon graphics have been impressively designed, with Rival using every pixel to maximum effectiveness.

For the wagering system, Rival has allotted 50 paylines that can be altered using the up and down arrows. Tycoon Towers features up to 10 coins and enables players to wager a $5 maximum on each spin. In-game symbols are comprised of the characters from the intro cartoon along with high-value playing cards.

SlotsMillion is one of the Rival casino sites that will have Tycoon Towers from launch on 27 July 2015. At present, SlotsMillion can boast of having more than 870 different slot games. Along with Rival, the casino also provides access to games from 18 other software developers. SlotsMillion is accessible across both mobile and desktop devices.