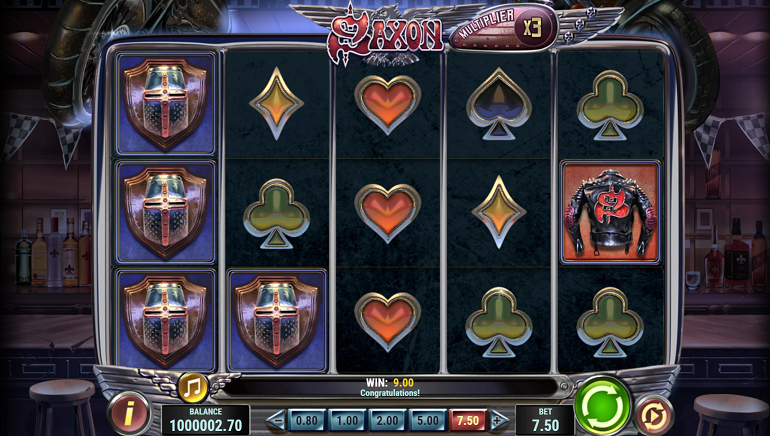 Saxon is a new slot from Play'n GO that features the classic British rock band across 5 reels and 10 paylines.

Play'n GO have added a new slot to their range of music-themed games. Saxon is based around the British rockers behind hits such as Wheels of Steel and Strong Arm of the Law. It's a 5-reel game, with 10 paylines, and comes with features such as stacked wilds and win multipliers.

Get Ready To Rock

The game features vocalist Biff Byford, along with eagle emblems, leather jackets, biker helmets, and playing card symbols. Players of this online and mobile-optimised game can pick from 8 Saxon hits to play along as the reels spin.

Features include stacked symbols that fill whole reels at a time. Players claim win multipliers based on the number of stacked reels seen in a winning spin. Each increases the multiplier by 1x but the Saxon logo is a wild symbol, and any stacked wilds in a win will increase it by 2x. The wild also the highest-paying symbol, worth up to 50x the total stake.

Saxon also comes with a free spins bonus round that starts when Byford and the motorbike appear at the same time. Any win multipliers carry over to this bonus round. A random number of between 5 and 15 bonus games play out, and once a multiplier is activated, it only goes up with more stacked symbols, never back down.

The Stats On Saxon

Players can place wagers of 0.10 and 100.00 on each spin. It's a high volatility game with long-term average paybacks of 94.22%. Maximum payouts can reach 10,000x the triggering stake. Neat animations and images of Biff Byford, his Harley, and other themed symbols will appeal to fans of the band. The chance to play some of Saxon's biggest hits will further enhance the game.

Saxon joins other rock-themed slots in the Play'n GO library, such as Testament, and Annihilator. It's available from 13th August at sites that carry this popular range.