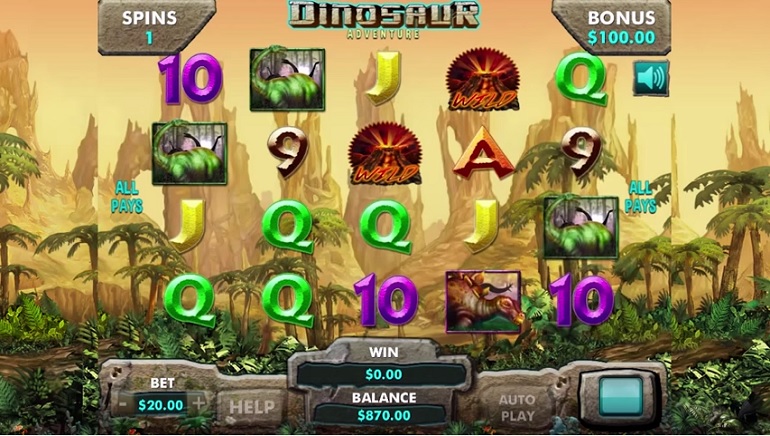 Genesis Gaming, a leading online slot provider, has just released its latest slot game, Dinosaur Adventure. The new release is currently available exclusively at Unibet Casino, but will probably find a home at other Genesis Gaming casinos such as BETAT. If you love dinosaurs, or love winning large jackpots, this game is sure to pique your interest.

About the Game
Even non-dinosaur lovers will be won over by Genesis Gaming’s dino-themed slot. The game has a 5x4 reel layout, and 1024 ways to win. The theoretical RTP (Return to player) is stated as being 97.248% - quite high!

The most fun, and most potentially lucrative, special feature in this game is the Dinosaur Free Spins Feature, which is triggered when three or more Scatter symbols land on the reals. In the Free Spins Feature, players can win up to 20 free spins with Wild Multipliers, and land a staggering x64 Multiplier (x4 x4 x4) when Wilds appear on the reels. Additionally, two or more Scatter symbols can yield unlimited re-triggers.

Scott Sims, Head of Global Design at Genesis Gaming, commented on the game, “Dinosaur Adventure was designed to be an exciting game for the true gambler. The wild multipliers in the free spins bonus bring in the high volatility and big wins that make for a thrilling game.”

Dinosaur Adventure is available in HTML5, Flash version and native iOS or Android formats, which means that it can run on both mobile devices and PCs.

Genesis Gaming has been supplying video slot content since 2008, and has since then become a leader in the online slot industry. Genesis Gaming creates video slots for general release as well as customized slots based on their clients’ requests. Their games are usually optimized for mobile, either in HTML5 or in native iOS or Android formats.