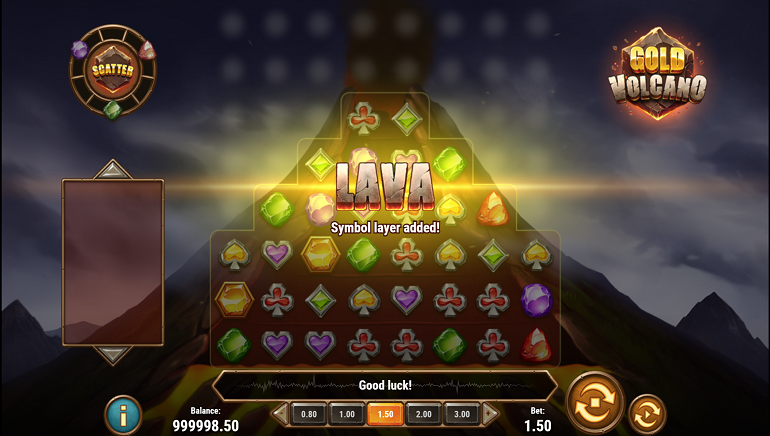 Gold Volcano is played on a volcano-shaped grid that has 8 columns with varying numbers of symbols. Bets range from $.10 to $100 and the RTP is 96.2%. The game is rated a 7/10 on Play’n GO’s volatility scale.

Gold Volcano from Play’n GO is a well-designed slot that makes the most of its volcano theme in terms of setup and features. The slot is played on a volcano-shaped grid and the symbols can get shaken up and blown up as the fiery mountain looms in the background and the music urges players on. Features include multipliers, reel modifiers, and symbol transformations, along with a potential maximum win of 10,000x the stake.

Gold Volcano is played on a volcano-shaped grid that has 8 columns with varying numbers of symbols. Bets range from $.10 to $100 and the RTP is 96.2%. The game is rated a 7/10 on Play’n GO’s volatility scale.

Symbols include diamonds, clubs, hearts, spades, 4 gems in different colors, and a gold symbol. When 30 or more gold symbols land, players can win 1,000x the stake. Wins are scored when 4 or more symbols line up horizontally or vertically. They then disappear from view and make room for new symbols to cascade down.

The Pressure feature can be triggered randomly when the winning symbols are removed. When this happens, a wild is added to an empty space before new symbols cascade down. Wilds can randomly come with a 2x multiplier.

The Dormant feature can be triggered randomly during the base game on any non-winning spin. When this happens, 1 of 3 effects are performed: Rumble, Lava, and Excavate.

In Rumble, the symbols on the grid are shuffled and a scatter is added. In Lava, an additional layer of any symbol (bar the scatter) is created. In Excavate, 3-5 wild symbols are added to the grid.

Scatters can be collected to trigger the Crystallisation feature. For every 3 scatters collected, one of the lower-paying symbols transforms into gold symbols. Collection and transformation resets at the end of each round, unless the Eruption round is triggered.

Play’n GO’s Gold Volcano perfectly matches the theme with its mechanics and features. From the volcano-shaped grid to the symbol combustions to the aptly-named bonus rounds, Play'n GO's attention to detail makes for a blazing good time. The slot's maximum win of 10,000 the stake is as impressive as the force of nature, making it appealing to players who like action and high-win potential.