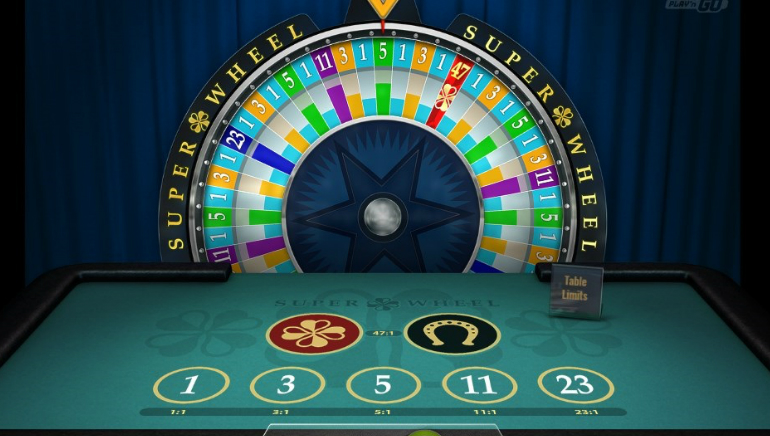 Play'n GO have released Super Wheel, a table game where players make bets on a numbered wheel that spins up winnings of up to 47:1.

Super Wheel is a new table game from Swedish developer Play'n GO. Similar to games found in land-based casinos across the world, the aim of Super Wheel is to predict which section of a large wheel will come to rest next to a pointer, with different payouts depending on the section that's backed.

Designed with a 3D effect table, there are a total of seven betting positions, with players able to pick a stake from the available denominations to the left of the game. Behind the table is the Super Wheel itself, which is divided into 52 segments with different values attached to each. The numbers 1, 3, 5, 11 or 23 are positioned around the wheel in different frequencies, and are repeated on the table, which represent the payouts achieved when each lands adjacent to an indicator at the top of it.

Other options include placing multiple bets across several numbers on a single spin, which allows players to hedge bets and cover more potential outcomes, while they can also make an instant repeat wager by using the Rebet button.

There are 2 special symbols which only appear in single positions on the wheel, with the horseshoe and four-leaf clover having the highest odds of 47:1.

Play'n GO have issued a press release regarding their newest game, saying that ''The spinning wheel holds the player in suspense until it eventually slows to a halt, landing on one of the 52 segments. A convenient game button allows the player to instantly place the same lucky bet round after round after round. Where she stops, nobody knows!''

Super Wheel is available to play at sites such as Casino Cruise, Mr Ringo Casino and BETJOY Casino.