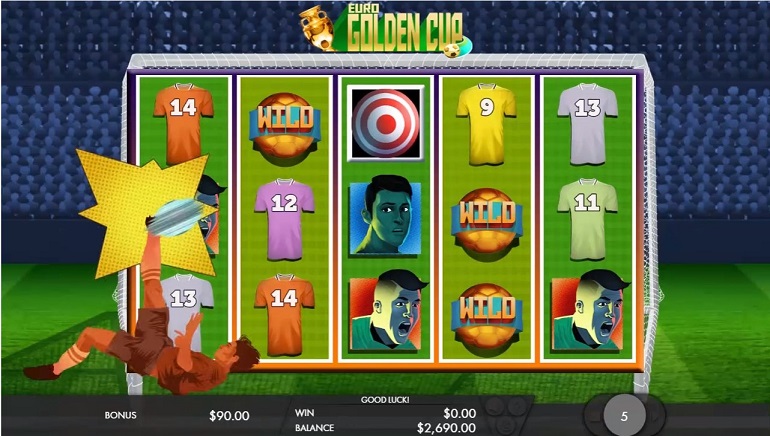 Genesis Gaming have announced the release of the Soccer themed Euro Golden Cup, which has been released just in time for the start of the Euros in France.

Euro 2016 has now commenced in France, and to coincide with it, Genesis Gaming have released the Soccer themed Euro Golden Cup slot game. Featuring extra rounds that get unlocked with special trophies, Euro Golden Cup is now available to play at online casinos that use Genesis Gaming software, such as Maria Casino, Video Slots Casino and Betvictor Casino.

With 5 reels and 25 lines, Euro Golden Cup can be played from $0.01 to $250.00 per spin, and features Soccer shirts and players as the main symbols. A wild symbol helps to complete winning combinations and a whistle acts as a scatter symbol to trigger a free spins game with expanding wilds. But the highlights of this game are the extra levels of play that get unlocked as trophies are collected.

This element, termed Graduated Features appears on a number of Genesis Gaming slots, and each extra layer has an enhanced Return To Player ratio.

Once enough trophies are gathered, three or more of the scatters landing at once will then give players the option of the free spins, or a Striker feature, where random symbols appear for the chance of further wins. Anyone collecting 30 trophies will then progress to the next level, where they will be able to choose a further Penalty Shootout feature on top of the ones already unlocked.

In this round, they get several shots on a goal, earning up to 5 credits for a score, while an opponent will also have shots on their goal. If the player beats the opponent, all credits gained so far are multiplied by five times, while scoring an equal number means that they are doubled in value.

James Watson, Director of European Sales at Genesis Gaming said ''Released the same week as the kick-off for Euro 2016, Euro Golden Cup keeps the football buzz going. Players can engage in football fun and be in control of all the suspenseful events commonly seen in a championship.''