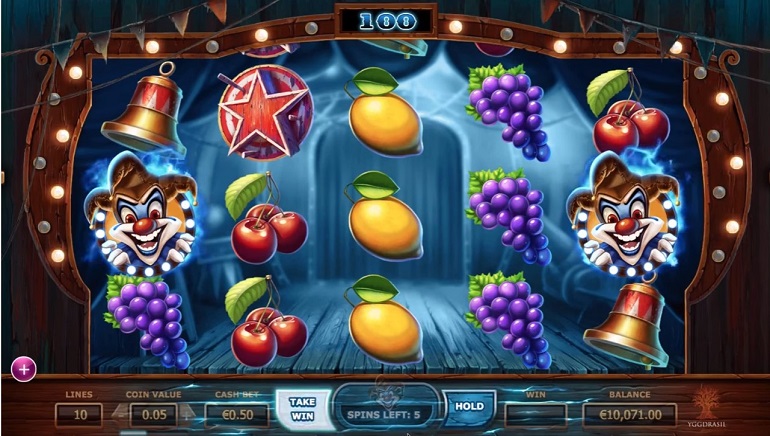 Yggdrasil channelled an edgier form of inspiration when creating 2015 slot release the Dark Joker Rizes. Well, fans of that video slot can now encounter a similar experience when playing the newly released Wicked Circus. The association with the Dark Joker Rizes is not coincidental, as this new game forms the third in a trilogy that was initially launched by Jokerizer.

The Wicked Circus is like a fun horror movie in that there is enough quirky humour to avoid players feeling scared. In this slot, Yggdrasil has integrated a musical score that twinkles throughout in an attempt to create a circus vibe. For visuals, the slot interface appears in front of a wooden stage cast in an ominous blue light.

On the actual interface, Wicked Circus has opted to use five reels and three rows in order to display 15 symbols at once. In regard to wagering, it is curious to see that Yggdrasil has only added 10 paylines, which is normally associated with high variance slots that favour a larger wagering strategy to generate winnings.

Given the relatively low volume of paylines, Yggdrasil has made the 10 fixed. On each wager, the coin value can be set between €0.01 and €1. Within the game, there are only eight different symbols, with just six being part of the core possibilities. The most lucrative of those is the red star, which can pay out a 300x multiplier with five at the same time.

Jokerizer Mode allows for players to collect or risk in a double-your-money bet, with potential to trigger locked reels for re-spins. In some instances, players can land a mystery win that will start at 500 coins but could increase right up to 6,000 coins.

For any gamers who want to visit the Wicked Circus, they can find it from April 2016 at Yggdrasil sites like Euro Slots Casino, Mr Green Casino, and Unibet Casino.