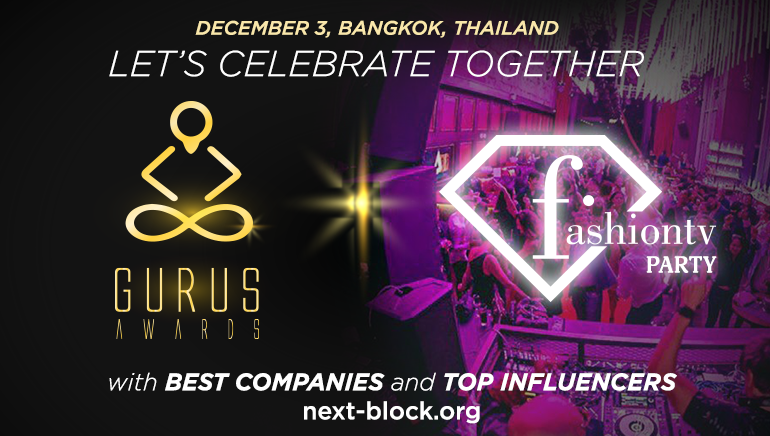 The next round of awards will inspire the entire industry, in keeping with the NEXT BLOCK conference mission.

Now that the formula has been established for a successful conference series, NEXT BLOCK ASIA 2.0 is introducing a new awards show feature.

The GURUS AWARDS will be added to the program to recognize and reward industry influencers.

As a conference built on the recognition and promotion of innovation, in the fintech and crypto industry, the NEXT BLOCK series will debut the GURUS AWARDS at the nearest NEXT BLOCK conference in Bangkok, Thailand after six successful conferences in various countries.

Organized in collaboration with Cryptovest and WebCelebs, the GURUS AWARDS will hand out specific awards for best services, organizations, and influencers in the fintech space.

The awards organizers seek to recognise the industry participants and stakeholders with the most impact on growing the fintech space while developing blockchain and producing crypto as fintech solutions for the masses.

With a wealth of nominations already submitted for the two award blocks of services/companies and individuals, NEXT BLOCK’s management is currently reviewing and shortlisting nominees for each category; shortlist nominees automatically eligible for the “Popular Choice Award” Nomination, awarded to the nominee with the most likes.

The GURU Awards ceremony will take place on December 3rd, in Bangkok, with the official ASIA FashionTV Party kicking off proceedings to uphold the standard of top after-parties in the industry.

GURUS AWARDS are in line for Award Distinction (Statuette & Certificate); Recognition & Publicity on behalf of Media Partners, incl. dedicated Article on Cryptovest and WebCelebs portals; Social Media Coverage by organizers; and the Video and Photography rights to Right to the Ceremony.

The GURU awards has been integrated into the usual agenda of extraordinary learning and networking opportunities established by NEXT BLOCK to encourage and promote industry growth among its full host of participants, speakers, investors, and founders. The industry should benefit from the heightened level of commitment.

Gearing Up for Entertainment Events