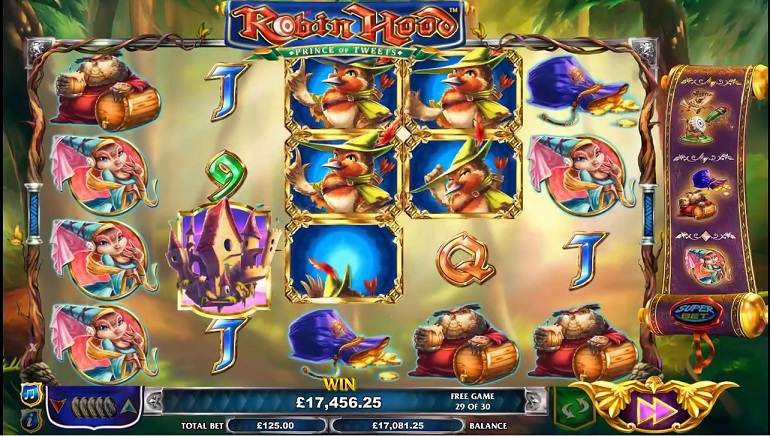 One of NextGen Gaming’s newest slots, Robin Hood Prince of Tweets, is a fun twist on an old classic.

Robin Hood Prince of Tweets is a 5-reel, 40-payline slot set in none-other than Sherwood forest, only in this case, the do-gooder and his band of merry men are actually birds and owls, who are just as skilled as the original characters at swordsmanship and archery.

The soundtrack is light and festive, and symbols include a princess, an owl, a sack of gold coins, a quiver, a Wanted poster, a bullseye, a castle, various card symbols, and of course, the Robin Hood bird that acts as a wild.

Special features include wilds, free spins, the Arrow feature, and SuperBet. The free spins feature is triggered when three or more scatter symbols (the castle) appear anywhere on the reels. In the Arrow feature, the Robin Hood wild can turn adjacent symbols into wilds, increasing a player’s chances of winning. The number of symbols that will turn wild depends on the SuperBet feature, which is an exclusive NextGen feature that includes an additional wager that can be adjusted with the control beside the reels to increase a player’s chances of winning.

Players can currently enjoy the new video slot at William Hill Casino, and it should be available for play at NextGen Gaming casinos such as 888 Casino and BetVictor Casino, so keep your eyes and ears open!

NextGen Gaming is the Sydney-based slots studio of NYX Gaming Group, and is a world-leading supplier of innovative slot games to the gambling industry. The company provides games to internet casinos, land-based operators and software providers all over the world, and has produced fan favorites such as Foxin Wins Again, Gorilla Go Wild, Jackpot Jester 50,000, Medusa II, Mad Mad Monkey and more.