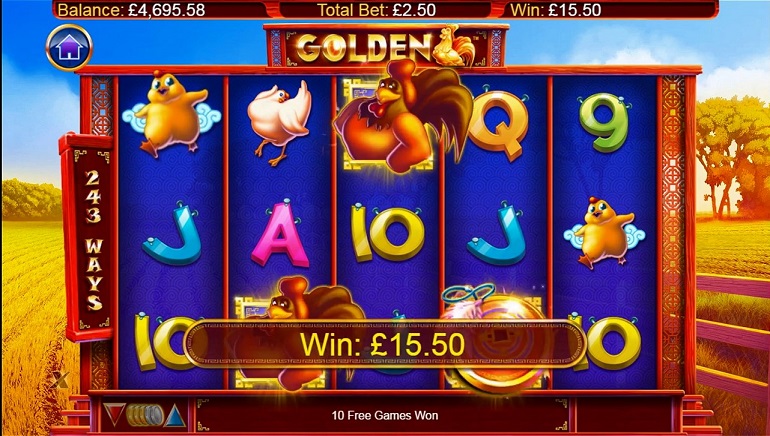 The Year of the Rooster will begin during January 2017. Watch for the new Golden slot to be released at NextGen casinos.

Just recently, it has emerged that NextGen Gaming is planning the imminent release of its new slot title, Golden. NextGen Gaming is renowned for being the software studio that has produced standout video slots like Foxin’ Wins Again, Great Wild Elk, and Justice League, so plenty of players are likely to be interested.

January 2017 appears to be the release date, with NextGen timing the slot to coincide with Chinese New Year, with the Year of the Rooster beginning at the end of the month. In keeping with the theme, NextGen has included a golden rooster as the star of the slot, which is placed on a fertile farm with all manner of related symbols.

Golden is a slot that will feel familiar to many players, from the five-reel by three-row design to the 243 ways of winning. Among the symbols are playing cards, chickens, eggs, and many more farmyard icons. Functionally, this is a slot game that experienced casino players can expect to understand from the outset.

Digging a little deeper, NextGen has integrated quite a high return to player percentage of 97.22%. In terms of volatility, Golden is regarded as medium to high, with the winnings not appearing as frequently as low volatility slots, but offering much larger potential payouts.

Getting into the special features, Golden will trigger free games with three or more scatter symbols. Beyond the scatters, players will also be able to use the golden rooster symbols in order to trigger the free games. This combined approach to wilds and scatters will make it simpler to gain additional spins.

When Golden is released, the slot can be played instantly on desktop and mobile web browsers due to the responsive design. You can watch out for Golden to appear this month at NextGen casinos.