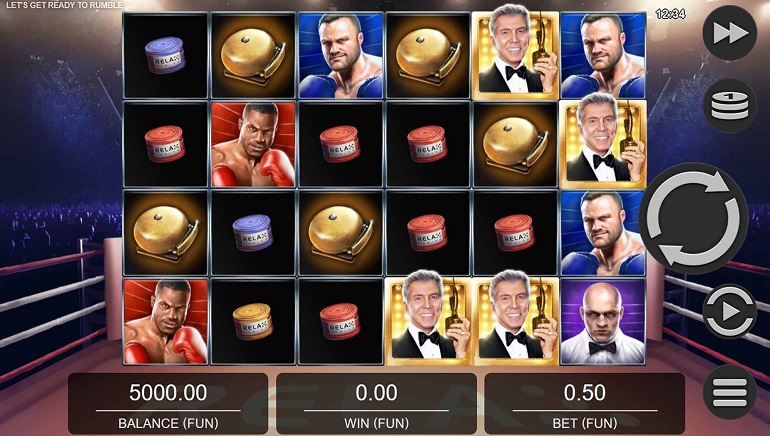 Michael Buffer needs no introduction to fight fans. His larger-than-life persona is summed up in just 5 words – Let's Get Ready to Rumble! Now, leading game maker Relax Gaming has launched an iconic slot of the same name!

Relax Gaming has been burning the midnight oil, bringing its latest video slot game to life – Let’s Get Ready to Rumble. Inspired by none other than super-fight boxing announcer Michael Buffer, Let's Get Ready to Rumble slot game is quickly winning over the crowds at online casinos. Relax Gaming’s latest release has already gained showstopper status with fans, and features a 6 x 4-reel layout with action-packed images of pugilists trading blows with one another.

The game features an array of iconic boxing fight sequences, including hard-hitting punches, rumble spin concepts, wild stacks, sticky re-spin features, and more. There are 466 active paylines in the base game, but as players move towards the main event a.k.a. the Title Fight, there are 1436 connected ways towards potential payouts. At that stage of the game, none other than Michael Buffer’s voice permeates the game to rapturous applause.

This proprietary sports-themed game by Relax Gaming is designed to delight fight fans. It comes hot on the heels of two other titles including Money Train and Temple Tumble. Relax Gaming has been anything but relaxed in recent months, with design and development teams crafting an array of world-class videos slots for a growing base of players. Thanks to its Silver Bullet and Powered By gaming studios, Relax Gaming is fighting fit and fans are loving it.

The CPO (Chief Product Officer) of Relax Gaming, Simon Hammon lauded the new game, and praised legendary boxing announcer Michael Buffer for lending his voice to Let's Get Ready to Rumble. This game is characterized by immersive features which are geared towards boxing fans.

As always, it's important to gamble responsibly. Gambling is a risky proposition, and players run the risk of loss. To avoid problems associated with gambling activity, set a bankroll and stick to it. Never gamble with money you cannot afford to lose, and know when to go. Practice responsible gaming at all times, and always ask for help if you need it.