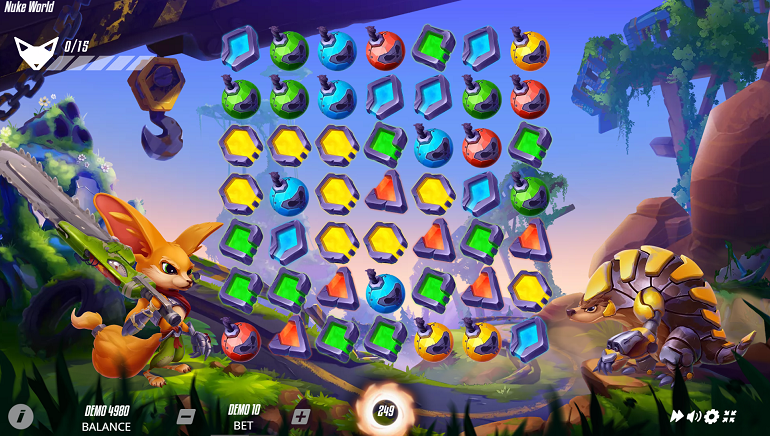 Evoplay has debuted a new release in the form of Nuke World, a post-apocalyptic slot with animal bosses to defeat en route to triggering multipliers.

Post apocalyptic themes have been popular in video games for years. Now, Evoplay Entertainment is bringing the concept to online casino sites in the form of the freshly released Nuke World slot. A whole host of innovative design features have been engineered into the latest multi-platform release from Evoplay.

Evoplay has openly based its cast of characters on comic books, with this motley crew of animals comprised of a rhino, rooster, chameleon, pangolin, and fox. Each of the animals can later trigger a special feature whenever the current boss is defeated.

Bomb symbols are also included and the goal is land matching images in clusters of five or more. When that happens, the symbols explode to deliver a multiplier that’s applied to the current wager. For added impact, a selection of special symbols and features have also been included by Evoplay.

The gameplay plays out on a slot interface comprising of seven reels and seven rows. No paylines are included, with the aim being to group symbols and blow them up. Following, that it’s possible for new symbols to land in their place.

The ultimate goal is to obtain a streak with 15 consecutive winning symbols, thus bringing about special features that are associated with the on-screen boss. This can lead to the creation of massive bomb symbols that are able to take up four or even nine positions on the screen and provide weighty multipliers or 2x and 5x, respectively.

Evoplay has opted to integrate a few random events that can be thrown up on occasion. Vortex causes Captain Fox to throw a bomb into the reels and attract similar symbols, Eviscerate can cut three diagonal lines to destroy symbols and add wilds, Flare causes lower value symbols to be destroyed, and Ricochet bullets will replace bombs with wild symbols.