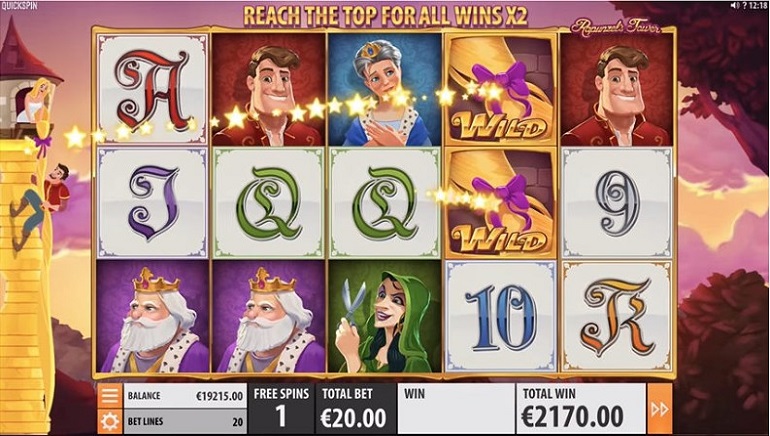 Rapunzel is an all-time classic fairytale that is now available to slots fans through Quickspin. Now upgraded with HTML 5 technology, this timeless tale comes to life in spectacular fashion with Rapunzel’s Tower Slot.

Rapunzel’s Tower slot by Quickspin is played on a 5 x 3 grid with 20 paylines. Players will enjoy multiple features including bonus wilds and Rapunzel wilds. This exciting slot game was released on 12 December 2017, and it features the age-old story of the young lass locked in a tower by a wicked witch.

Swedish game developer, Quickspin released this jackpot game with a wide betting range starting from as little as £0.20 to £200 per spin. Multiple symbols pepper the reels including a witch with a pair of scissors, Rapunzel, the king and queen, and the handsome prince. The cartoon-style animation offers maximum realism, and immersion.

The Prince is tasked with saving Rapunzel from a miserable fate. The game is amusing, entertaining, and captivating at the same time. Some of the many features include the wild stick until you win feature when you land 3+ bonus wild symbols on the reels. These will then be locked in place while the respin kicks in until you form winning combinations.

The Free Spins Bonus Round

The other feature is the free spins bonus round. This is activated when you land 3+ scatter symbols. Players will be awarded with 10 free spins when the tower feature lights up the reels. Watch the Prince ascend the tower to save Rapunzel from the wicked witch. Players can also win extra free spins while the Prince is climbing the ladder, and if he reaches Rapunzel, free spins can be enjoyed with double multipliers on all wins in Rapunzel’s Tower slot game. Rapunzel’s Tower is available at Quickspin-powered online casinos.