We've heard of return on investment, but this story is just ridiculous - an English slots player recent won a jackpot that was 138,000 times the value of his initial wager.

Cliff, as the man is known, placed a small wager on the Major Millions progressive slot game and was shocked out of his skin when he hit the jackpot. The London-based online gambler had only bet £3 on the game when the message came up on the screen informing him of his £413,490 jackpot win.

The 5-reel, 15-payline Microgaming slot has delivered dozens of big jackpots worth a combined tens of millions of dollars. Players have achieved the jackpot by betting the maximum following an exploding scatter symbol and then landing five Major Millions logos on the 15 th payline.

Stan James is an online casino bringing you the best of Microgaming's slots network plus titles from a number of other leading online gambling software developers including NetEnt, Chartwell, IGT, Realistic and Electracade.

Thanks to its partnership with a variety of manufacturers, it offers not only Major Millions but also dozens of other popular progressive slots with jackpots that frequently top the $1 million mark, including Mega Fortune, Lord of the Rings and Mega Moolah. 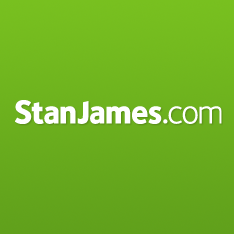