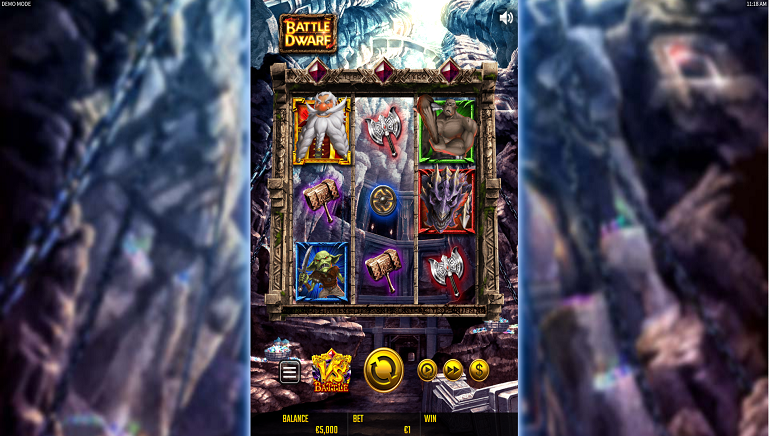 ORYX Gaming slot Battle Dwarf is noted for including a Japanese pachislot feature, with players able to enter a battle arena for a slew of rewards.

Multiplatform software specialist ORYX Gaming has a released a brand new game that embraces the Japanese pachislot. In the newly produced Battle Dwarf slot, ORYX Gaming has integrated a battle arena to complement the base gameplay.

ORYX Gaming’s content partners Golden Hero and Japan Technicals Games (JTG) worked in unison on the development of Battle Dwarf. The base gameplay is driven by a three-reel by three-row grid of symbols and five fixed paylines.

A reel with a Lock is designed to halt while every other reel shall be spun again. If players can obtain three Locks all at once, then they will unlock the Battle feature. Of course, it’s also an option to tap on the Vs Battle button to pay a guaranteed sum to trigger the feature.

The battle commences with the starring dwarf descending into the mines to do battle with terrifying monsters. The system works by players making picks determine whether they attack or receive damage, with the objective being to defeat enemies. Beating a stronger foe will result in a higher sum of free spins being given out.

Treasure Rush is a feature that can cause the lucrative treasure chests to land more frequently. The option is in place to receive one to 10 free spins or else gain gold or silver from the chests.

Ragnarök mode awaits at the higher levels of Treasure Rush, wherein the dwarf character starts to obtain new powers. At this point, he will be granted the ability to battle with a dragon every 30 spins of the game.

At random, the Elf bonus can present players with a button and the chance to receive a reward. The Battle outcome is the most favourable, while the alternative of securing a big win is still appealing in its own right.