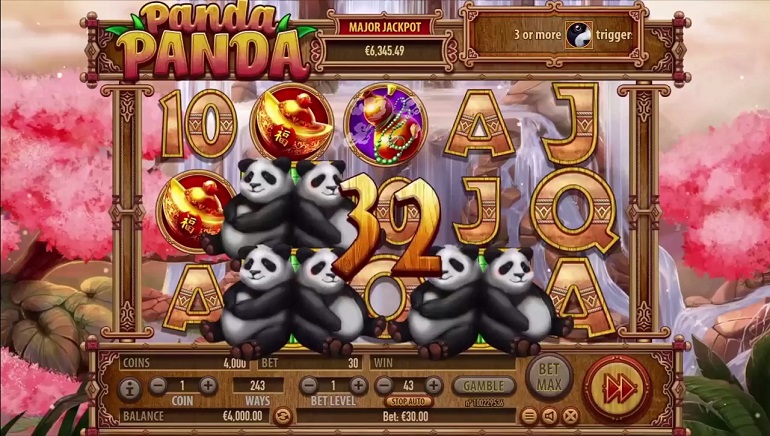 Panda Panda is a brand new slot game from Habanero that has some unique features and a popular theme.

Online games developer Habanero have released their latest slot game Panda Panda this month. Filled with images inspired by China, it's got the classic 5 reels, but an unusual way in which winning combinations are paid out, while extra features such as free spins and wild substitutions add to the appeal of the game.

There's a backdrop of pink cherry blossoms behind the reels of this game, but one thing players won't see are any payline indicators, as replacing the usual lines is a 243 ways to win system. Symbols only need to land on 3 or more adjacent reels, in any positions, to create a win. While this isn't an unusual feature, Panda Panda is different, as it will pay out from either the left or right sides, depending on where the highest value win line starts from.

Playing card symbols from 10 through to A will create many of the wins, and higher-value prizes come from landing images of bamboo, lotus flowers, golden bowls and a waterfall, all designed with sharp detail and in vivid colours.

Of course, pandas make themselves at home in this game, acting as wild symbols that replace others if they can complete a winning combination, and the reason the title is doubled up is because pandas can also appear as double symbols. This has the effect of creating longer lines of matching images, for higher payouts.

A free spins bonus game plays out against a backdrop of a bamboo forest, with 10 games initially awarded. These can be retriggered by any 3 or more scatter symbols.

Players can also win a progressive jackpot prize, with the Mini, Minor, Major, Grand and Mega jackpots each being worth different amounts, and there's the potential to scoop any of them following any spin.