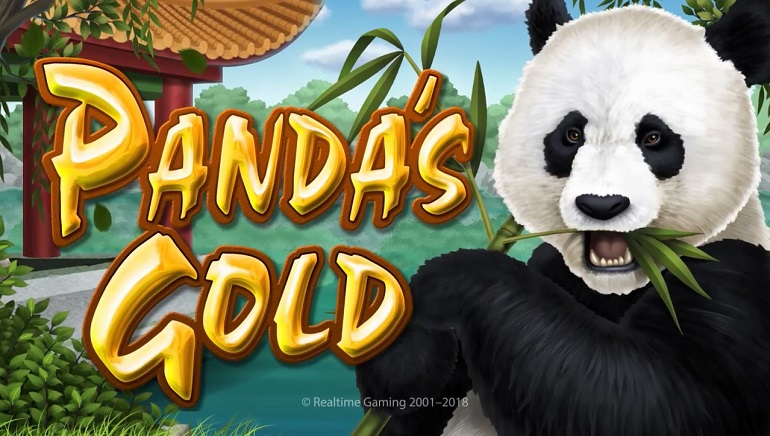 Get back to nature with the Panda’s Gold slot, which is newly released this July from Real Time Gaming and offers free game features.

Real Time Gaming (RTG) is embracing the call of the nature for its brand new Panda’s Gold slot, which is designed entirely around these black and white creatures that are native to Asia and viewed as symbols of good luck. Now they are set to inhabit RTG casinos from July 2018 and beyond.

Initially, what has emerged is that Panda’s Gold has been designed to be compatible with both desktop and mobile devices. In the latter case, the Panda’s Gold slot will be accessible on leading smartphones and tablets, including those that run the current versions of iOS or Android.

Once the slot game has loaded, Panda’s Gold will show off Asian huts positioned next to a tranquil lake and hills. That collective image serves as the backdrop for what is a five-reel slot that comes complete with three rows to display the 15 symbol positions that have been integrated in the design process by RTG.

After the gameplay commences, Panda’s Gold shall give players the opportunity to win from potentially 88 paylines. RTG has engineered the paylines so that they shall only payout in the direction of left to right. Ultimately, it will be possible to win a top prize of 50,000x times the base bet while playing Panda’s Gold.

RTG has included a fortune scatter that is capable of giving out a complimentary re-spin when three or more symbols are landed in view on the reels. In fact, there will even be two re-spins if four or more scatters make an appearance.

Following the re-spin feature, Panda’s Gold will then trigger eight free games. These can come in one of three varieties, with Prosperity delivering 3x winnings on wilds, Wealth giving 8x, and Fortune also providing 8x, but also rewarding players with a 5x multiplier for winning on a re-spin.