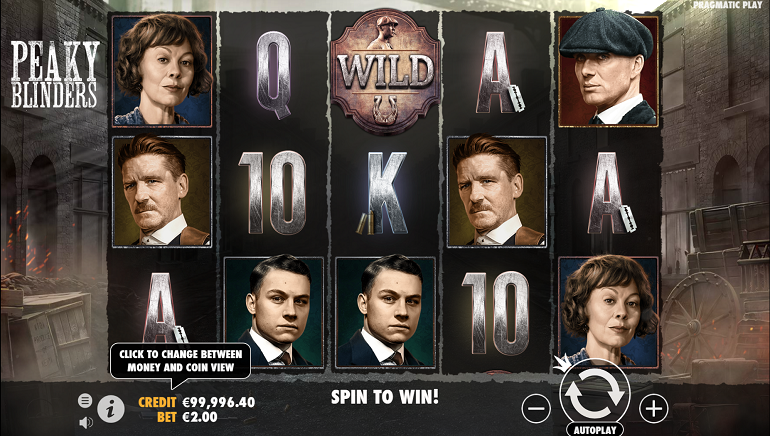 Pragmatic Play has gone gangster with the release of an officially licensed video slot based on hit UK TV series Peaky Blinders.

From humble beginnings on UK television, Peaky Blinders has exploded in popularity. Since launching in 2013, it has been watched by tens of millions of viewers across the world. For the uninitiated, the Peaky Blinders were a real-life gang from 19th century Birmingham.

The show follows the exploits of the Shelby family, who lead the gang and use the members to further their business interests in gambling and other industries. In the slot, Pragmatic Play has been licensed to include images of Tommy and Arthur Shelby as well as Polly and Michael Gray. Incredibly, this is the first branded slot ever developed by Pragmatic Play.

By tapping the plus or minus buttons, the wagering value can be modified from one coin to 10 and the coin value from €0.01 to €0.50. High rollers can go in at the €100 maximum stake, whereas other players can stake from the €0.20 minimum level.

Pragmatic Play rates the Peaky Blinders slot as four out of five on the volatility scale, while the theoretical RTP is 96.50%. Symbols can payout from left to right when matched along 20 fixed paylines, with the Peaky Blinders symbols offering higher payouts compared to the playing cards.

Wild symbols can be just as valuable as the Tommy Shelby symbols, though are unable to substitute for any of the special bonus images. First up is the Shelby Betting Shop feature, which is triggered if this symbol lands on the fifth reel with a bonus symbol on the first and third reels. At random, any character symbols from the Peaky Blinders shall receive a cash reward and free spins are active.

With bonus symbols on the first and third reels, a By Order of the Peaky Blinders symbol can appear on the fifth reel to initiate the second special feature. This also provides free spins but the player can first benefit from character and wild symbols being held in place for a re-spin.