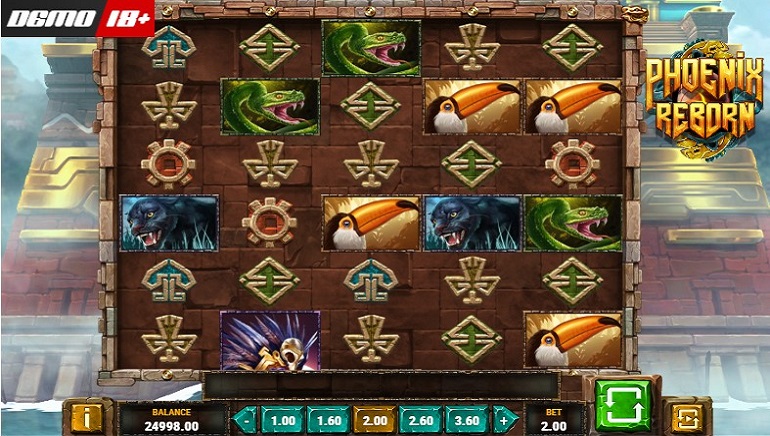 An ancient civilization emerges from the ashes with Phoenix Reborn. This fast-paced video slot game from Play'n GO features wild animation, free spins and winnings up to 5,000 your bet.

Phoenix Reborn slot game is a spectacular mythological adventure for thrill seekers. Powered by the inimitable Play’n GO software, Phoenix Reborn is the latest red-hot title to hit the scene. Set against an imposing backdrop, Phoenix Reborn plays out on 5 reels, with 6 rows of captivating game play.

Fashioned off the ancient Aztecs, this game boasts high quality audio-visual elements and immersive entertainment. With 40 lines in play, slots fans are required to match 3, 4, or even 5 symbols to rack up wins. The Phoenix symbol is the wild symbol and it substitutes for other symbols in the game to form winning combinations.

Players can win up to 5000 x their bets on Phoenix Reborn slot game. The high-paying elements feature 3D animation with the burning Phoenix wild, the Aztec Princess, and the Aztec Wizard. The low-paying symbols include the Black Panther, the Green Mamba, and the Hornbill. A combination of intricately-carved Aztec symbols completes the range of symbol offerings in the game. These are designed in the form of hearts, clubs, spades, and diamonds.