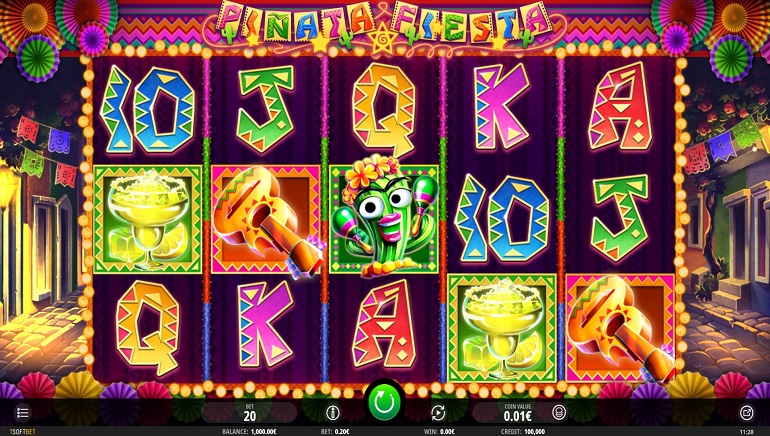 A Mexican party is underway in the new Piñata Fiesta slot from iSoftBet, which is playable on multiple devices at participating casinos.

iSoftBet casinos have brought out a playful new video slot for the warmer months. The Piñata Fiesta slot is playable across participating casino sites. The Mexican-themed slot has colourful piñatas alongside tasty margaritas, tuneful guitars, smiling cacti, chillies, and other fun symbols.

Those playing Piñata Fiesta will discover that iSoftBet has made it possible to assign the coin value from €0.01 to €20.00, and that’s while covering the fixed paylines that have been layered over the five reels and three rows. As a result, the minimum wagers can be €0.20 and the maximums can be €20.00.

The golden star works as the wild symbol and helps by substituting for missing ones, except for scatters. Additional stars can make an appearance thanks to the Popping Wilds and Grande Reels, with the latter randomly stacking an entire reel of wild symbols.

Popping Wilds and Grande Reels can be unlocked at random by smashing the piñata that can randomly appear on any spin. One of the other random features available from the piñata is Mega Spiñata, which can lead to a supersize symbols covering the first three reels entirely.

Another of the random features is Fiesta Frenzy. Basically, this carries the potential to upgrade all royal symbols that are in view. When altered, the royals become the high value red chilli symbol instead. Five chillies can trigger a 250x multiplier when perfectly matched on the same payline.

Free spins are the final special feature and can be obtained by landing three or more piñata scatter symbols in view at the same time. Three can earn 10 free spins, four gain 15, and five trigger the maximum of 20. At the end of free spins, more can be won by successfully picking from the three piñatas shown on the screen.