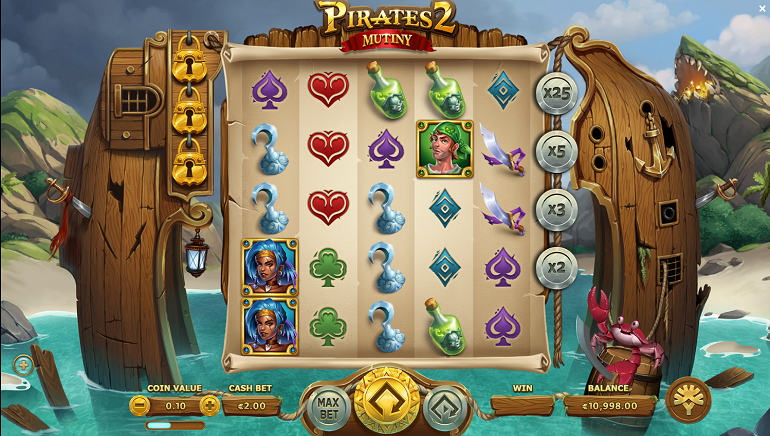 Pirates 2 Mutiny is a piracy-themed video slot that has been developed by Yggdrasil Gaming to include an array of special features.

Newly released on 3 December 2020, Yggdrasil Gaming’s Pirates 2 Mutiny slot is a swashbuckling affair that has been designed for piracy fans. This release comes in the wake of other Yggdrasil slots, including Hyper Burst, Victoria Wild, Valley of the Gods 2, and Jackpot Express.

In developing Pirates 2 Mutiny, Yggdrasil has produced with a slot that features a 96.20% return to player (RTP) and a 117 volatility rating. As for the maximum winning potential, this has been stated as €490,000. As for accessibility, the slot can function on Windows, Mac, Android or iOS, including Chrome, Firefox, Safari, and Internet Explorer as the web browsers.

Pirates 2 Mutiny does not function like a mainline video slot and utilised a grid of five reels by five rows. Rather than spinning the symbols, players need to create Dropdown Wins that occur when six or more matching symbols are connected on the screen.

Once the win is credited, the symbols are removed and then filled by new ones. When there are two clusters, then lower-value symbols are generously upgraded to match the higher-value ones. When a win does not occur, the Tsunami feature can randomly launch to rearrange the symbols and trigger a payout.

When the bottom two rows are matched, this can cause the multiplier on the side of the screen to increase. Meanwhile, there can be Mutiny symbols that land and present a 3x3 symbol that will be chosen at random.

In keeping with the piracy theme, there can be Cannon Blasts that blast all of the low-paying symbols from the interface. Lastly, there are scatter symbols and three or more can award free spins. With free spins, a single high-value symbol will replace all of the different high-value symbols.