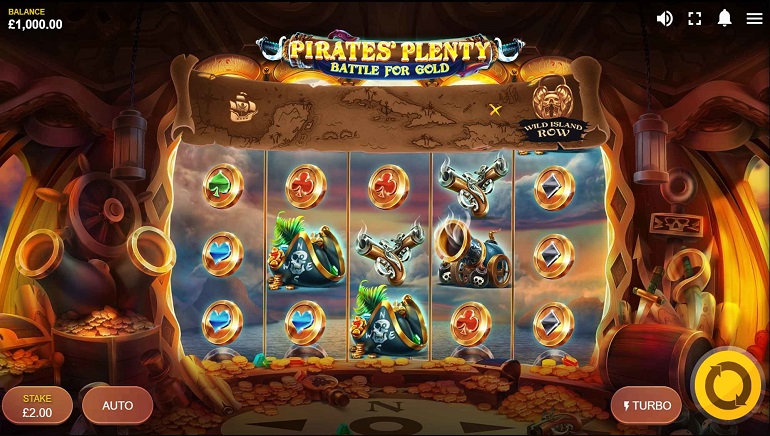 Red Tiger Gaming launched its most daring high seas adventure yet, with the popular Pirates Plenty - Battle for Gold slot game. This time around, the swashbuckling pirates are ready to reward players with up to 5,000 x winnings.

Red Tiger Gaming is renowned for its collection of world-class video slots games. To commemorate the release of their 100th slot game, Red Tiger has gone full steam ahead with Pirates Plenty – Battle for Gold. This online video slot game follows hot on the heels of Pirates' Plenty – The Sunken Treasure. Now, Red Tiger has officially set sail with a 5 x 3-reel adventure filled with gold coin, rum, firepower and pirates aplenty.

Players are tasked with collecting all the scattered pieces of an ancient Treasure Map. Once the fragments are put together, the Fourth Wild Island Row will be revealed. Players must unlock this feature to stand a chance of winning up to 5000 x their bet. Pirates’ Plenty – Battle For Gold is an uproarious slot game with expertly-crafted animation and Vegas-style gaming realism. Players will note the feature-rich selection of pirate-themed symbols including cannons, skull and cross bones, treasure chests, cannons, pistols and an expertly-crafted pirate galley.

This video slot game is ideally suited to players on the go – smartphones, tablets and phablets. As Pirates’ Plenty – Battle for Gold sets sail, players get to explore many rich elements in the game. These include locked wilds, bonus spins, free spins (activated when players hit 3 x battle spins), and the notorious Blackbeard who will be throwing firebomb wilds which deliver huge rewards for players.

The Director of Business Development for Red Tiger Gaming, Carl Ejlertsson was elated at the launch of this latest adventure. Given the groundswell of support for its predecessor – Pirates’ Plenty - The Sunken Treasure, it comes as no surprise that this upgraded game is exceeding expectations in a big way. This sequel is expected to ignite a frenzy of activity among players, particularly with the unique free spins which features sticky wilds, treasure map escapades, and an overall exciting player experience.