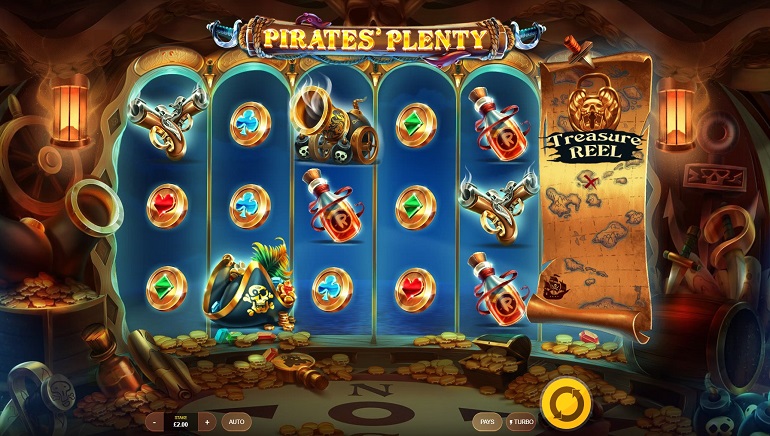 February 2019 marks the release of Pirate’s Plenty: The Sunken Treasure across a variety of major devices at Red Tiger Gaming casinos.

Pirate’s Plenty: The Sunken Treasure is a brand new slot series introduced by Red Tiger Gaming. From 28 February 2019 and beyond, the Pirates’ Plenty slot shall be playable on desktop, smartphone, and tablet at Red Tiger Gaming casinos.

In Pirates’ Plenty, players shall embark on a slot-based voyage that incorporates the common trappings of pirate lore. As a slot, the game starts off with five reels, but will give players the ability to unlock a sixth reel as part of the special features.

On a technical basis, users will get to play a slot with 20 fixed paylines. When it comes to wagering, the lowest option starts at €0.20 and rises through a variety of options before maxing out at €20.00.

Pirates’ Plenty is on the higher end of the volatility scale, as is suggested by the 5,000x maximum jackpot up for grabs. Meanwhile, there are 1,000x multipliers that are won by matching either five skulls or five wild symbols.

The Treasure Reel feature can be unlocked by gathering map symbols. Following this, the Treasure Reel will stay open for all forthcoming spins. At this point, Wild Ships will also be introduced and can cover an entire reel (these replace the Wild Monkey). Some of the extra-large wild symbols can even appear with a 2x, 3x, or 5x, multiplier on top.

Ocean Spins are intended to be unlocked with three logo symbols. Along with free spins, this feature will award keys that can be used to unlock sunken treasure chests. These can contain either wild symbols or free spins to extend the special feature.