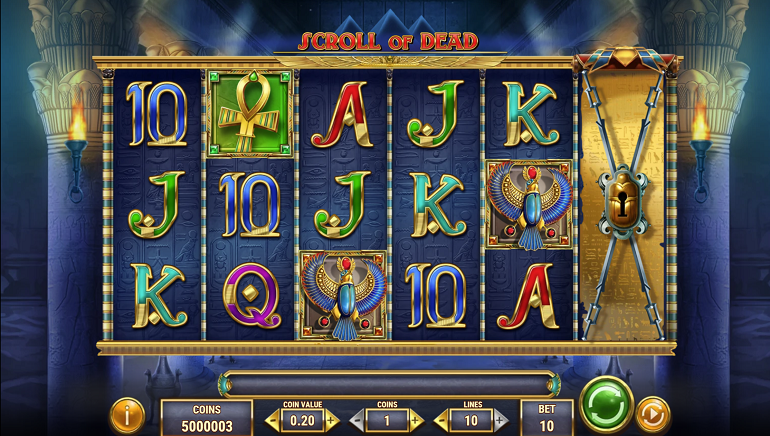 Scroll of Dead is a follow-up to the 2020 hit slot game - Legacy of Dead and has all the best that it had to offer.

Play 'n Go has special expertise in these types of games and players should really appreciate the thought and design that was put into every aspect of this title.

About Scroll of Dead

The game is set in a fire-lit temple and right upon first glance, there are two things that are very unique. The first is the extra 6th reel, locked until players hit the magic number of scatter symbols to unlock it. Secondly, the familiar face of Rich Wilde has been removed and replaced by his attractive daughter - Cat. The game has the same feel as the Book of Dead, even the symbols are familiar.

The symbols are reminiscent of similar games with the 10, J, Q, K, and Ace, but, there are some new ones including some birds, snakes, and some women that look a lot like Cleopatra. In the main game, if a player hits lines with five premiums, they can be worth from 50 to 500 times the wager, but that will increase to 100 - 750x the wager when the 6th reel is in play.

Again, the main game is played on a 5x3 grid, but when the free spins feature is in play, the game turns into a 6x3 grid. Although the game is not a night and day change from its predecessors, the 6th reel feature adds a new dynamic that is truly unique and has the opportunity to improve the gaming experience for all that play.