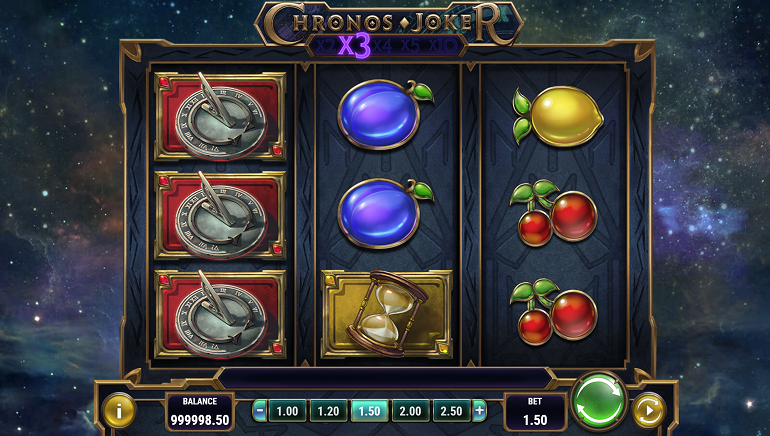 Play’n Go has decided to manipulate time in its brand new Chronos Joker slot, which is scheduled to release soon on mobile and desktop devices. For this slot, Play’n Go has gone with a retro feel supported by three reels and three rows.

Watches of the future, pocket watches, hourglasses, and sundials are embraced as the more valuable symbols, while the lesser ones are retro fruits in the form of cherries, plums, grapes, and lemons, while a joker lands as the wild symbol on the ten paylines.

In addition to the core winnings, extra can be gained from the random multipliers of 2x, 3x, 4x, 5x , or 10x. At times, those randomly awarded multipliers can increase to be worth 4x, 6x, 8x, or 20x.

Second Chance Re-Spin occurs when an incomplete payline has only two matching symbols. At this point, the reels are locked in place and a re-spin triggers on the third reel for the chance to finish the payline.

Spins of the Future is quite similar except a 2x multiplier (4x with Super Multiplier)also has to be active when two reels display matching symbols. This time, however, the re-spins keep on going until triggering a win. The multiplier can simultaneously rise with each win until the sequence is broken.

With Spins of the Past, if two stacks of the same symbol land on the reels and the x10 multiplier is active (20x with Super Multiplier), then the stacks will be held and the remaining reel gets re-spun. Re-Spins will continue until there is a win, and the multiplier will go down on each re-spin.

Finally, Spins of the Present will initiate with two matching symbols and a 3x, 4x, or 5x multiplier (6x, 8x, or 10x with Super Multiplier). Everything will simply stay as it is while the third reel spins until delivering a complete win.