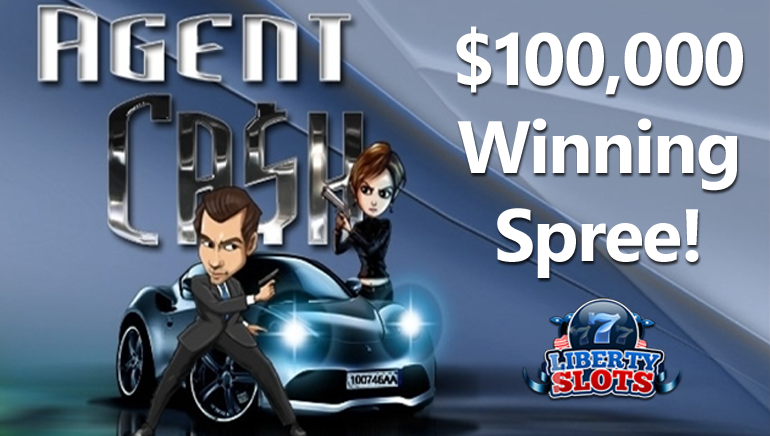 Liberty Slots Casino is an online and mobile site that has been open to US players since 2011. One fortunate customer, referred to by the site as Rafella D. has enjoyed an exceptional winning spree over the last 10 days of December, when she claimed five big wins, all playing the Agent Cash slot game.

California resident Rafella D. started her run of luck on December 21st, with an $8,500 prize and it continued with a nice Christmas surprise on the 25th, when she won a further $11,000. The wins kept coming in on the 28th of December when she bagged a $60,000 prize, while just two days later, her bankroll was boosted by another $21,000.

On New Year's Eve, she scooped another $32,000, taking her total for the previous week and a half to $132,500 and making this what must be one of the longest winning streaks ever.

The Agent Cash slot machine is a 5-reel, 30-line game based around a secret agent and his beautiful assistant. Features include expanding wild symbols, free spins with extra exploding wilds, and a special Pick or Die bonus game, where spinners choose from a selection of 30 cards, claiming prizes until they find one that ends the round.

Although there's no progressive jackpot in this game, Rafella D. still played with enough coins to scoop sizable prizes when the right symbols lined up for her on several occasions.

Some Details On The US-Friendly Liberty Slots

This online casino is registered in Curacao, and therefore able to welcome players from the USA, as well as many other countries. Featuring the WGS Gaming range of slots, table games, Keno, Bingo and Video Poker, it's a popular site that awards bonuses to their players and gives them a choice of deposit and withdrawal options that includes Bitcoins alongside credit and debit cards or e-wallets.