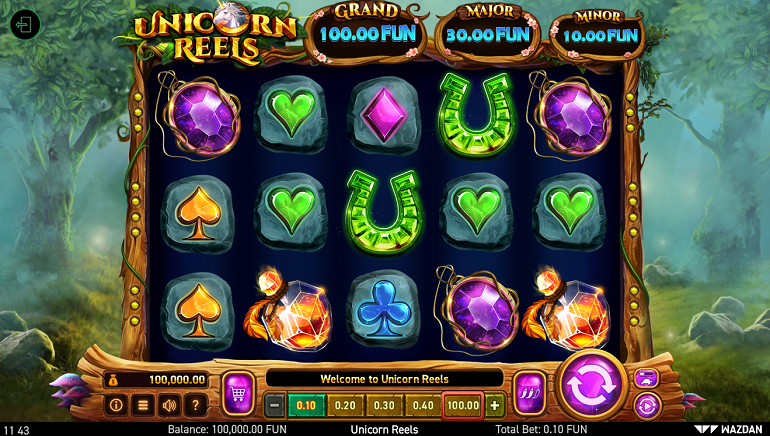 The latest desktop and mobile slot from Wazdan takes players into a magical forest, where they discover respins and jackpots in the Unicorn Reels game.

The Unicorn Reels slot machine trots into desktop and mobile casinos to enchant players with its magical theme and rewarding features. It's the latest game from Wazdan, and plays out over 5 reels and 10 lines. Unicorn Reels comes with features such as respins which can lead to big jackpots of up to 1,000x the bet, and wild symbols.

High-end graphics are used throughout, with the reels placed within an enchanted forest. Playing card suits and colourful jewel symbols appear on rune stones, along with a lucky golden horseshoe and 4-leaf clover wild symbol. Unicorn symbols in at least 5 places at once will launch a jackpot game that plays out on a new 5x5 grid.

Players get at least 3 respins, with any new unicorns adding a further 3 spins. Mini and minor jackpots pay out if 15 or 20 unicorns appear in the feature, with a grand jackpot of 1000x the stake paid to players who fill all 25 symbol positions by the end of the feature.

During the base games, magical globe scatter symbols pay in any places, while the wild clover symbol makes it easier to complete wins when it acts as others.

An optional gamble feature gives players the chance to double their wins on the turn of a playing card. Unicorn Reels is available to play for between 0.10 and 100.00 per spin. It comes with a medium volatility matched to an average return to players percentage of 96.14%.

Andrzej Hyla, Chief Commercial Officer at Wazdan, said: “Creating innovative titles is the bedrock of our company and we’re delighted with the addition of Unicorn Reels to our fast-expanding games portfolio.

“With a fairytale theme and magnificent Unicorns gracing the title, players will be on the hunt to find as many of the fabled beasts as possible for a chance of winning the Grand Jackpot.”