Players Go Ape with Lightning Gorilla from Lightning Box - available only at 888Casino! 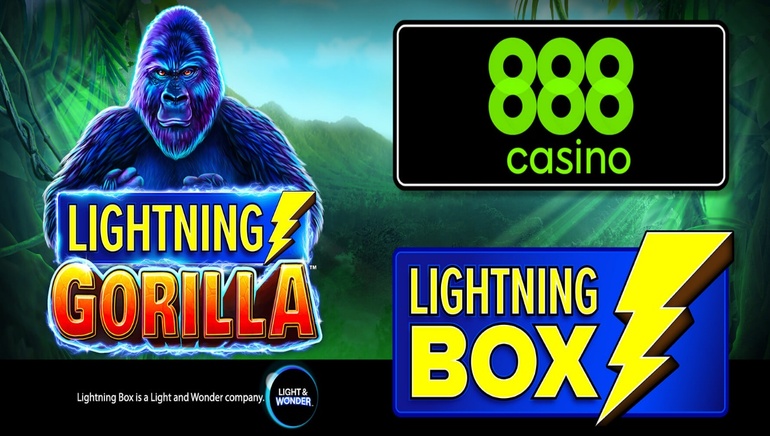 Lightning Box has just released its latest attraction, Lightning Gorilla. This high-flying video slots game can be enjoyed exclusively at 888casino for two weeks before its network-wide distribution begins!

It's official; Lightning Box has just released a high-flying slot machine game with a powerful primate in the starring role. Lightning Gorilla video slot is exclusively available at 888casino for two weeks before it embarks upon its network-wide release. Players can now catch the rich and rewarding Lightning Gorilla slot game, replete with all its features, functions, and benefits.

This animal-themed slot machine game features 40 lines of gorilla-go-wild adventures. The Australian gaming studio has implemented the Lightning Re-spin feature in the game, along with a multi-tier Lightning Jackpot. Players can win up to 1250 X their bet size, with four levels of big payouts up for grabs.

The Lightning Gorilla goes bonkers when players land from 6 to 12 Lightning Bolt Symbols anywhere on the reels touring the base game. These symbols instantly trigger the Lightning Re-Spin Feature. Once active, players get to enjoy three re-spins. They can immediately reset when Lightning Bolts with cash value symbols appear on the reels. When these symbols land on active reels, they are instantly collected and added to the player's bankroll balance.

Depending on the bet size, players can win anywhere from 0.5 X – 1250X in payouts. Lightning Gorilla slot game is readily available to players through the Light & Wonders platform named OpenGaming™. Other top-tier titles that players can enjoy include 100xRA and Murphy's Pots.

The vice president of game development at Light & Wonder, Rob Proctor, had this to say, 'The team at Lightning Box have done it again, Lightning Gorilla is a great game, and we are delighted to add it to our OpenGaming™ platform. Their signature Lightning Respin feature is fantastic, and I have no doubt players will love this game.'

The operations manager of Lightning Box, Michael Maokhamphiou, had this to say, 'Players have been shouting from the rooftops about how much they enjoy our Lightning Respin feature, so it only seemed natural to develop a brand-new game around the popular feature. Lightning Gorilla is a fantastic addition to our already strong portfolio of slots, and we think players will go wild for this lucrative new title.'

Based in Sydney, Australia, Lightning Box is a leading provider of video slots games to the online gaming industry. Scientific Games acquired the company in 2021. It has brought many successful games to market, including Dolphin Gold, Lightning Leopard, Astro Cat, Silver Lions, Lightning Horsemen, Chicken Fox, and Stellar Jackpot Serengeti.