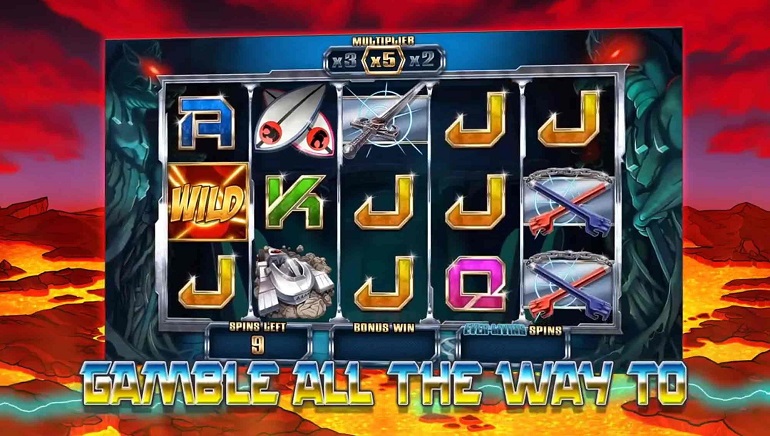 Welcome to Thundera, Home of the ThunderCats

Players get to meet all their favorite heroes and villains, including the fearless ThunderCats leader, Lion-O, his trusted team including Panthro, Cheetara, Tygra, WilyKit and WilyKat. There are evil forces lurking in Thundera, and it's up to the ThunderCats to keep the wicked Mumm-Ra and his cronies in check.

This amazingly popular 1980s series has a huge global fan base. Blueprint Gaming™ has worked hard to bring ThunderCats™ Reels of Thundera to life for players across regulated jurisdictions. During the gameplay, it is possible to awaken the Eye of Thundera on any spin. Once this happens, there are 7 modifiers, and an amazing 6 bonus rounds available to players.

When players land 3+ ThunderCats bonus symbols, it's possible to trigger between 1 and 6 features which you can Collect, or Gamble. This 20-payline video slot game features intergalactic battles between the ThunderCats and their arch-nemesis Mumm-Ra.

ThunderCats fans will get to collect big-money payouts as they battle it out against Mumm-Ra and his control over Third Earth. This follow-up slot game comes on the heels of the original ThunderCats release by Blueprint Gaming.

As the UKs premier gaming studio for online casino games, Blueprint Games are available to a wide audience of players across Europe. In 2019, Blueprint Gaming title, The Goonies won the prestigious Gaming Intelligence Awards Game of the Year title. ThunderCats™ is licensed to Warner Brothers entertainment Inc and Ted Wolf.