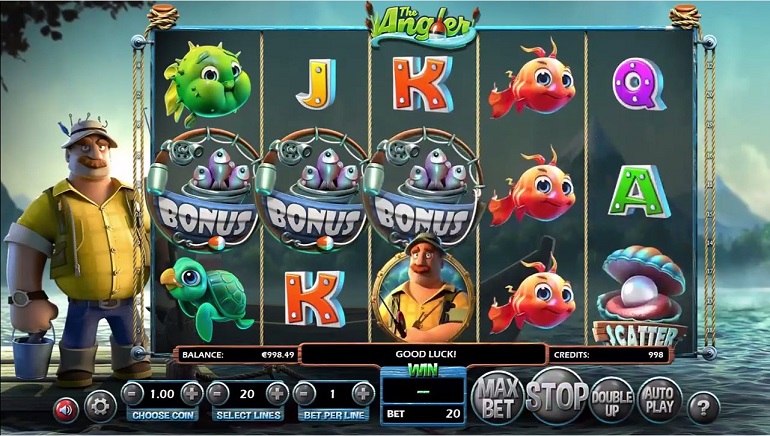 The Angler features a relaxed, soothing atmosphere and two bonus games, one of which has a potential to really pay big.

Betsoft has become synonymous with 3D slots, and this is one niche in the game development sector where they pretty much reign supreme. Their stunning Slots3 series features some really amazing titles, and a few days ago, the company added another game to this series. The name of the game is The Angler and the theme, as you might have guessed, is fishing.

Betsoft's new game is set on a backdrop of a calm mountain lake on a beautiful day. The Angler follows the adventures of an elderly fisherman Otis, who, like the most anglers, dreams about the big catch and bigger stories that would come after.

Symbols in The Angler fit well with the theme, as you'll encounter fish of different shapes and colors, turtles, wild octopuses, and oyster pearls (scatters). The accompanying soundtrack is calming and relaxing, making The Angler one of those games to pick when you really want to chill and unwind. Otis standing on the side of the reels, clapping and jumping after every big win, is guaranteed to bring a smile to your face, further boosting the overall atmosphere.

The Angler features 20 paylines across five reels, and apart from a nice atmosphere, it also offers a possibility for some serious wins. This is especially true during the free spins round which is triggered by three scatters landing anywhere on the reels.

Ten free spins are awarded initially, but the round can be re-triggered, and the main feature to look for are the Clingy Wilds. Every wild symbol that lands on the reels during free spins will remain in place for the duration of the round, and this offers a big winning potential, especially if you manage to win more free spins and fill those reels with wild octopuses.

The fishing game is triggered by three bonus symbols making an appearance on the reels, and it will have you try and catch as many fish as possible for a straight-up cash reward.

The Angler is a nice addition to Betsoft's Slots3 series, especially for the fans of calm and relaxed games that allow you to enjoy your gaming time. If you feel like giving it a try, you can find The Angler at many Betsoft-powered casinos like Oshi Casino, Eat Sleep Bet Casino, and Omni Slots Casino.