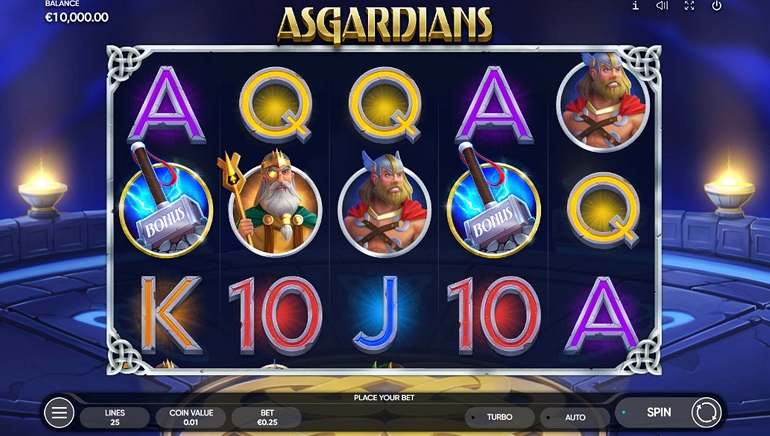 Asgardians slot is a tribute to the Norse gods including Freya, Loki, Thor, and the mighty Odin. This ancient adventure begins with the fantastical Rainbow Bridge and culminates in the Forge where otherworldly features await…

Players come face-to-face with all of their heroes, in real-time, as they embark upon spectacular adventures into otherworldly realms. When players land 3+ Rainbow Bridge symbols – a.k.a. the Scatter Symbol – the doors of the Great Hall will open up. Within these chambers, players are privy to Bonus Spins, with the option to triple winnings during 10 x Bonus Games. When players land 3+ Thor symbols, the powerful hammer Mjolnir is wielded. At this point, players will enter the world-famous Forge, where the bonus game awaits.

Asgardian craftsman will construct shields and test them against one another. When the Norse God of Thunder’s mighty hammer spins and hits a shield, massive prizes can be won. Endorphina’s latest game tests players mettle like never before. The Norse Gods and Goddesses have high expectations of players. Odin has the power to bestow great riches upon his legions, while Thor has unbelievable strength that players certainly need in the Forge. Big wins are up for grabs in this MGA-approved slot machine game.