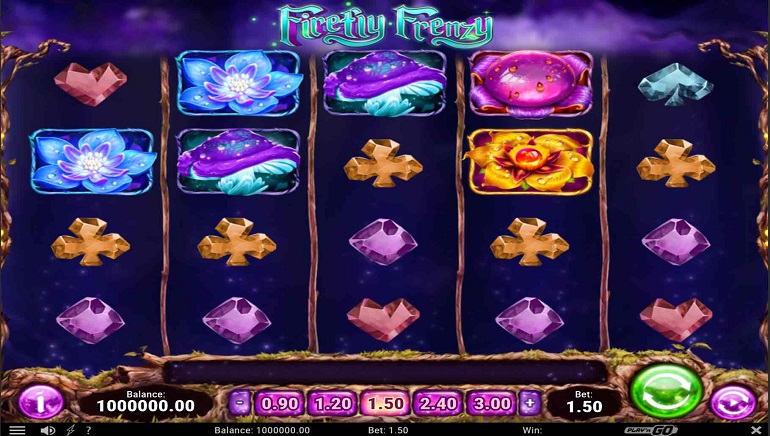 Firefly Wilds and Frenzy Spins are the two special features included in the new Firefly Frenzy from Play’n GO this summer.

Play’n GO is tapping into the summertime vibes with the release of Firefly Frenzy, a slot set in the depths of an enchanting forest filled with luminescent plant-life and colourful gems. Players can enter the moonlit Firefly Frenzy slot for the chance to win in many different ways.

Firefly Frenzy will feature an accessible design in which the slot can be displayed on PCs, laptops, tablets, and smartphones. The compatible browsers include Chrome, Firefox, Safari, Internet Explorer, available over the likes of Android, Windows, MacOS, and iOS.

The aim of the base game is to spin and match the core symbols in groups of three or more along the 30 fixed paylines. The paylines can be viewed clearly in the paytable and are arranged in different configurations over the five reels and four rows of the slot’s interface.

A low wager of €0.30 is enough to start spinning the reels, but Firefly Frenzy can also accept bets of up to €90.00 at the maximum. Play’n GO has included an auto-play feature for users wishing to assign a wagering limit and set number of spins – stop conditions are also included.

Firefly Wilds are not only substitute symbols. Play’n GO has ensured the wilds can also be multipliers, with 2x and 3x variants available. In fact, many different wild symbols can combine to deliver a top multiplier of 243x – players can aim to line up wilds on the same payline.

The Moon symbol can be used to initiate the second of the special features. This entails landing a Firefly Wild on top of the moon symbol to trigger Frenzy Spins. The symbol that triggered the feature will then become the minimum wild multiplier activated. Frenzy Spins can be re-triggered for the chance to win a top windfall of 10,000x multiplier.