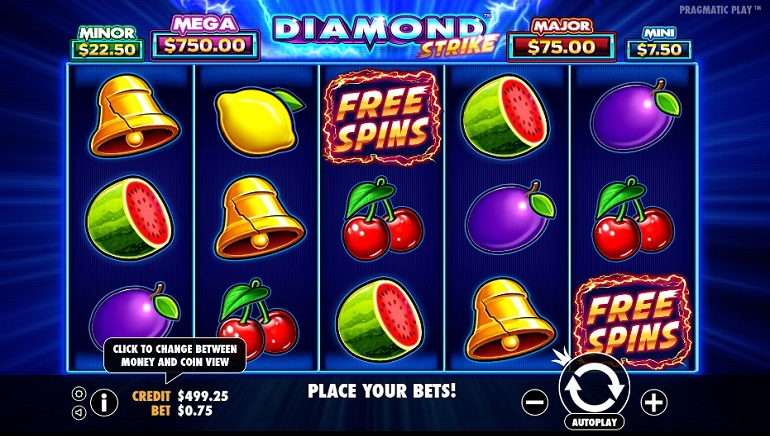 The latest slot from Pragmatic Play is a classic fruit machine styled game that manages to pack in some advanced bonus features.

This 5-reel, 15 payline game sets the blue-tinted reels against a bright blue background, for a simple but very effective appearance. The symbols are in an equally no-nonsense style, with clear, sharp graphics, and it's all accompanied by a funky soundtrack and the realistic noises of tumbling reels.

We've had symbols of plums, lemons, cherries and watermelons featured in countless slots over the years and Pragmatic Play have gone with tradition in Diamond Strike. But that's no bad thing, as there's a huge pool of players who like the classic style and charm of these games, while others may want to give the reels a spin anyway, as it's got some up to date extras triggered by the right symbol combinations.

A Batch Of Bonus Symbols

There are several special symbols in play, each with their own unique features. The high-value Diamond will hopefully help players to strike lucky when it acts as a wild, substituting for others and because it's stacked on the reels, it should be easier for this shiny icon to create extra winlines.

A golden 7 takes you to a prize-picking game, where 12 diamonds are lined up and anyone finding 3 matching jackpot amounts will win between 10x and 1000x their triggering bet amount.

The Diamond Standard Of Free Spins

Hitting 3 bonus symbols at once launches 8 free spins, but these come with the added attraction of extra wild diamonds in the mix, so there's lots more chances to land multiple wins before the round is finished. These spins can be retriggered an unlimited number of times if the bonus symbol appears again.