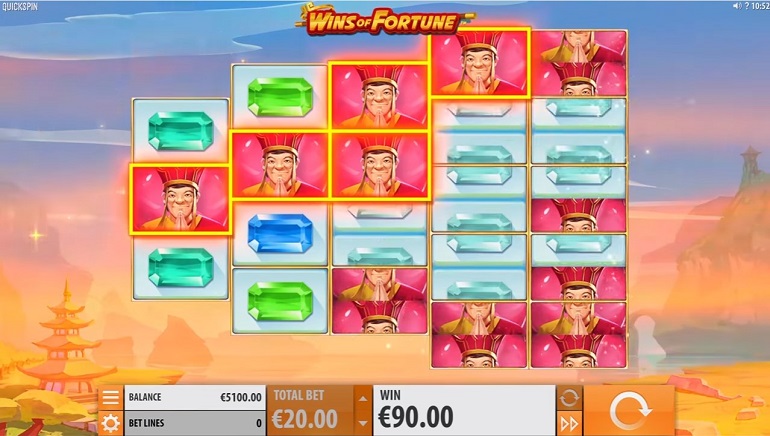 Wins of Fortune is a mythical slot adventure that plays out in Asia while delivering so many re-spin rewards.

Wins of Fortune is the very latest slot to arrive at Quickspin casinos, having been released on 13 June 2017. This slot will see players embark on a quest to scenic valley situated in Asia, where a cast of mythical characters will appear as symbols and to fuel the various outcomes that can trigger.

Players will encounter a staggered slot interface where there are three rows of symbols on reels one and two, while there are four rows on reels three and four. Finally, there are five rows on the fifth reel to create a slot that starts off with 19 symbols.

However, the symbols will not remain the same from spin to spin. After players have earned a winning combination, they will then receive a re-spin while the interface increases by adding new symbols.

For players, the ideal outcome is to undergo a run of consecutive wins to continuously increase the numbers of ways that they can win. Potentially, it will be possible to expand the entire slot all the way to 25 symbols if players can win six times in a row. During this time, any winning spins will be held in place to provide a further advantage.

After reaching the five by five grid, Quickspin’s Wins of Fortune slot the sky will dramatically turn red. At the same time, players will notice that all winning symbols are held in place. This will continue for every consecutive win, with the game re-spinning and delivering more winnings.

Wins of Fortune has been constructed with an HTML5 framework that allows for the video slot to be playable along most major devices. Desktop players will have easy access, but so will anybody who has a tablet or smartphone that is found on Android, Apple iOS, or even Windows Phone. Wins of Fortune is out now from June 2017.