Playing the New Zombie-Themed Slot From Habanero, The Dead Escape 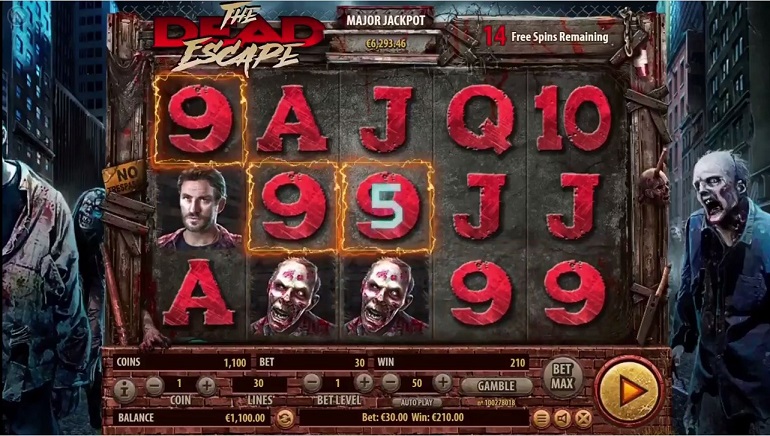 The Dead Escape is a brand new slot game from Habanero that sees zombies and survivors battle it out over 5 reels and 30 paylines, triggering free spins and expanding wilds.

Anyone who likes a good zombie apocalypse is going to enjoy spinning the blood-soaked reels of The Dead Escape slot machine from Habanero which has just been released. Hoping to take a bite out of the market, this game sees a father and daughter trying to survive attacks from the undead, and players treated to bonuses like free spins, multipliers, wild symbols and scatter payouts.

About The Dead Escape

Even as it loads up, players know that they are in for a gruesome treat, with a suitably grim backdrop of zombies, skulls and general decay behind the reels, and realistic graphics giving this game the appearance of a Hollywood movie.

This 5 reel slot has 30 paylines and symbols that can transform from the living to the dead when they make up a winning combination. Playing card symbols, all in a blood red hue, will make up the lower-value wins, and the main bonus round is triggered by the pickup truck scatter symbol that takes players to a new set of reels.

On the way, there's a zombie attack sequence taking place on the highway, and once the 15 bonus games have started, the thrills keep coming, with expanding wilds that release walking corpses and the potential for further spins.

Father and daughter team up to keep the zombies from eating their brains, and some nice animations sees either character bitten, or killing a zombie with each high-value win.

Speaking about their latest gory game, Toni Karapetrov, Head of Corporate Communications at Habanero said “The Dead Escape is one of our most thrilling releases yet, with players spinning their way to safety from the zombie invasion. The gory graphics and spine-tingling soundtrack will keep players on a knife-edge, in what is sure to be an intense gaming experience.”

You can expect to find The Dead Escape at Habanero-powered online casinos.