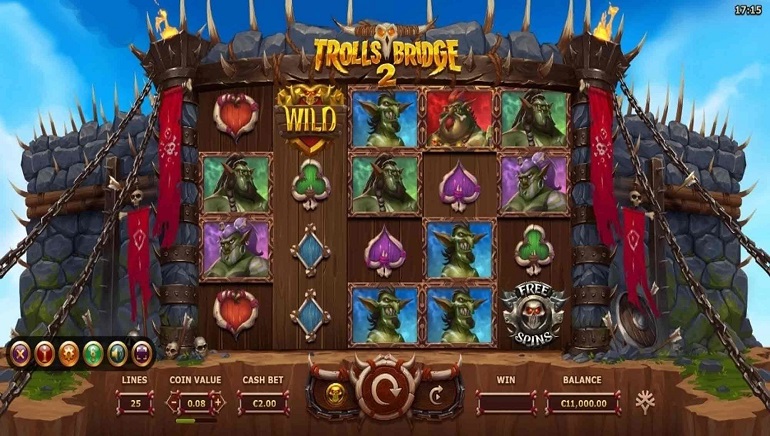 The Trolls Bridge 2 sequel to the original slot from Yggdrasil is going to release exclusively across Betsson sites from July 2019.

Yggdrasil Gaming has announced that the follow-up slot to Trolls Bridge is going to be released exclusively across brands operated by the Betsson Group. Released in July 2019, the Trolls Bridge 2 slot was developed exclusively for Betsson as part of a special deal struck between the two companies.

What greets players in Trolls Bridge 2 is the sight of a five-reel and four-row slot interface that represents a gate barring entrance to a fortress. This is capable of displaying 20 symbols for each spin of the game, with images depicting fearsome trolls, playing cards, and special symbols.

A low cash wager of €0.10 is accepted for each spin, but the coin value can be raised all the way up to €4.00 for a maximum €100.00 wager. On any given spin, Trolls Bridge 2 will present players with 25 fixed paylines to spin and win from. Meanwhile, auto-play can assign spins in intervals of 10 up to 100.

Free spins have been majorly shaken up, with Trolls Bridge 2 offering 18 features on top of the spins. Rolling three or more free spin symbols will trigger the feature, with more bonus feature picks being awarded with a greater number of symbols. The Golden Bet option costs an extra 10 coins, but will add an extra free spin feature when triggered.

Trolls Bridge 2 features a Bonus Cauldron that can land randomly on the fifth reel to deliver prizes that can include free spins, free spins features, and coins. There are also Bonus Stones that can be thrown at winning spins to provide an added multiplier boost.

Yggdrasil has also built in four types of wild symbols, including Regular, Troll, Random, and Colossal, which can cover two-by-four reels or two-by-two reels. Ultimately, players can win up to 2,500x times the assigned wager while playing Trolls Bridge 2.