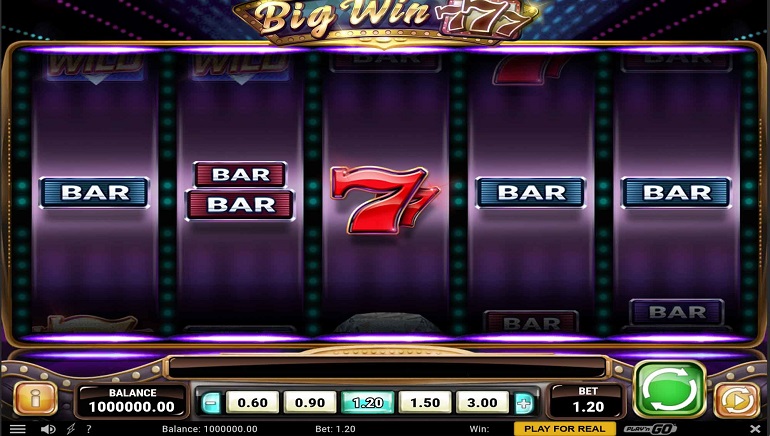 The new Big Win 777 slot by Play'n GO combines the best of two worlds as it offers a classic vibe of old-school Vegas slots mashed up with sharp graphics and modern animations.

Regardless of how far the gaming industry has come, classic Vegas slots never go out of style as there are always players who enjoy that good, old vibe. Catering to those players as well as anyone who's up for a bit of a throwback, Play'n GO has released Big Win 777 slot. The game features five reels, 15 paylines, and symbols like 7s, single, double, and triple bars, and shiny diamonds acting as wilds.

While the Big Win 777 slot may feature classic Vegas-style symbols, Play'n GO has combined it with its recognizable high-quality sounds and visuals, producing a game that brings the best from the both worlds: the classic vibe of old-school slot machines and sharp, crisp graphics of modern-day games.

To win in the base game, players need to land at least two of the diamond or 7 symbols or three bar symbols on one of the paylines. Diamonds are the highest paying symbol, followed by golden and red 7s, and three different bar symbols.

The bonus feature in Big Win 777 is triggered by landing three Chance Wheel scatters on reels one, three, and five. This can either happen randomly on any spin or during a Booster Spin, which guarantees at least two scatters on the next spin.

Landing three scatters activates the Chance Wheel bonus, where players get to spin the wheel and win either a monetary amount up to 777x time their stake or free spins.

If the wheel stops on free spins, a new bonus feature is triggered, kicking off with 12 free spins. Each new scatter landing during the bonus will add an extra free spin, while landing all three on the same spin will activate the Chance Wheel once again, offering a chance to win up to 20 more spins. In the bonus, wild symbols stick and expand on the reels to increase winning chances. Wilds will remain on the screen until they fill up the entire reel, after which they'll disappear.