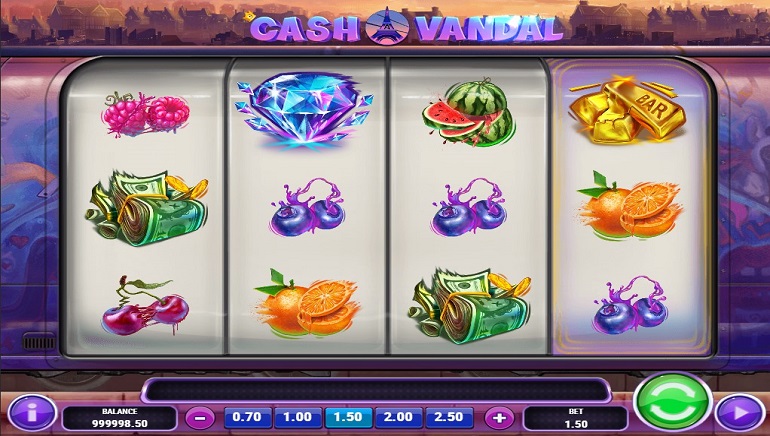 Cash Vandal is a new Play’n GO slot that is based around European street art and comes complete with a number of special features.

Cash Vandal is a new slot available at Play’n GO casinos, where players can experience a game that centres around street art and takes in a number of iconic European cities, including Berlin, London, and Paris.

In Cash Vandal, Play’n GO has a designed a more compact slot with four reels and three rows. That combination allows for 12 symbols to appear on the reels, with the imagery featuring modernised versions of the old school fruits that appear in slot machines.

Play’n GO has integrated 10 fixed paylines in Art Vandal, which allows for players to wager from a minimum stake of €0.10. There are plenty of other values to choose from all the way up to a maximum wager of €100.00.

Delving into the special features, there is a Golden Spray Can that can land on the fourth reel in order to activate. Alone, it can trigger a re-spin, while also creating a symbol that can be stacked up to eight high on the reels.

However, if the Golden Spray Can is combined with the Red Spray Can, then this results in a free spin with stacked wilds and the unlocking of a City feature. A City feature can be experienced with as many as 10 free spins and will give players the chance to win up to 5,000x times their stake.

The Paris feature will synchronise reels one and two to allow for 2X2 mega symbols to appear. London can then integrate up to nine mystery symbols that can randomly land on reels one, two, and three. Then there is a Berlin feature that will randomly paint two or three wild symbols on reels one, two, or three.